'Uglydolls' is Humor for All - Ashley's Review 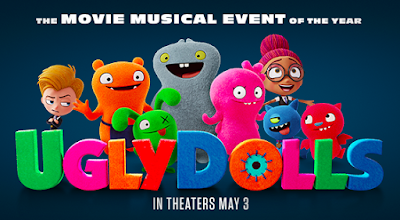 Read Ashley's review of Uglydolls. In the adorably different town of Uglyville, weird is celebrated, strange is special and beauty is embraced as more than simply meets the eye. Here, the free-spirited Moxy and her UglyDoll friends live every day in a whirlwind of bliss, letting their freak flags fly in a celebration of life and its endless possibilities. The endearingly unique residents of Uglyville occasionally look to the sky above the town, where a new UglyDoll will appear and be embraced by the community. 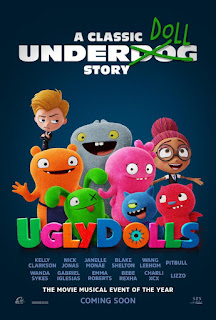 Ugly Dolls is about Uglyville which is the town where rejected dolls deemed too ugly. In Uglyville lives Moxy (Kelly Clarkson) who believes that it is her destiny to find “her (human) child” and helps get her friends on a journey to find out of if her dream is real. Along the way they encounter perfect dolls who will stop at nothing to prevent them from finding children.

This movie is a musical which I was not expecting. Several members of the cast are musical artists including Kelly Clarkson, Janelle Monae, Blake Shelton, Nick Jonas and more so I probably should have expected as much. That being said, Ugly Dolls has songs that will get stuck in your head which is not a bad thing. The visuals mixed with the music was at an all time high level of cuteness for the supposedly “ugly dolls”.

The humor in this movie was something for all ages which was nice. I heard both adults and kids laughing at various times during the movie which helped keep viewers’ attention on the adorable characters. It also has a good message while at the expense of being cringeworthy during some of the bullying from the perfect dolls. I understand the message they wanted to convey however some of it may have gone a bit too far for a children’s movie and seemed to drag out for a smidge too long. It also started to feel a like propaganda for buying certain types of toys which started to get redundant and dull.

Despite this, Ugly Dolls is a movie that will have you smiling at the cute/ugly characters. Having such recognizable voices from many celebrities ranging from musicians, actors and comedians was fun to watch and will have you wanting to turn on the soundtrack after watching.