Read Kelsi's review of Wildlife. Fourteen-year-old Joe is the only child of Jeanette and Jerry — a housewife and a golf pro — in a small town in 1960s Montana. Nearby, an uncontrolled forest fire rages close to the Canadian border, and when Jerry loses his job — and his sense of purpose — he decides to join the cause of fighting the fire, leaving his wife and son to fend for themselves. Suddenly forced into the role of an adult, Joe witnesses his mother’s struggle as she tries to keep her head above water. 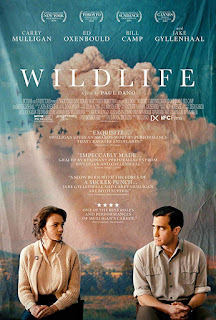 Wildlife is in select theaters on November 2nd, 2018.

Wildlife is a sad but ever so occurring story of a child being put in the middle of a parental feud. Living in 1960’s Montana, fourteen year old Joe seems to have the perfect life. Loving parents and food on the table every night, that is until his father, Jerry, loses his job. An unemployed Jerry seems to be common within the family though. We know this when Joe’s mother tells him to just trust his father like they always do when he is jobless.

Jerry (Jake Gyllenhaal) struggles with getting a new job and Joe’s mother Jeanette worries about how they will pay the bills. Being that it is 1960, it is typical that the husband works while the wife stays home all day with the child. So, when Jeanette and Joe are forced to get jobs of their own, Jerry feels as though he has lost his sense of purpose. No longer being able to provide an income for his family, he turns to “becoming a hero.” With forest fires popping up all over the Canadian border, Jerry decides he is going to leave his son and wife behind and help fight the fires. Jeanette, unable to handle the fact that Jerry has left, goes down a slippery slope and loses track of the fact that she still needs to be a mother to Joe. Forced to grow up quickly, Joe’s life is never to be the same again.

This movie has a lot of underlying symbolism throughout. While we see wildfires burning in the background, there is also a wildfire burning between Joe’s parents. It was a nice twist in who the movie is centered on, as you watch through the child’s perspective. I enjoyed this movie and thought that Ed Oxenbould (Joe) played an awesome role in the film. A big promotion of this movie seemed to be the fact that Jake Gyllenhaal is in it. However, you barely see him. When he goes off to fight the wildfires, you don’t see him again until the very end of the movie. So, heads up, do not base seeing this movie on the fact that it stars Jake G.