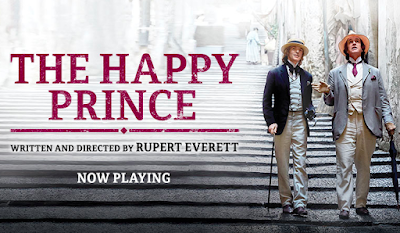 Read Will's review of The Happy Prince. In a cheap Parisian hotel room Oscar Wilde lies on his death bed and the past floods back, transporting him to other times and places. Was he once the most famous man in London? The artist crucified by a society that once worshipped him? The lover imprisoned and freed, yet still running towards ruin in the final chapter of his life? Under the microscope of death he reviews the failed attempt to reconcile with his long suffering wife Constance, the ensuing reprisal of his fatal love affair with Lord Alfred Douglas and the warmth and devotion of Robbie Ross who tried and failed to save him from himself. From Dieppe to Naples to Paris freedom is elusive and Oscar is a penniless vagabond, always moving on, shunned by his old acquaintances, but revered by a strange group of outlaws and urchins to whom he tells the old stories - his incomparable wit still sharp. THE HAPPY PRINCE is a portrait of the dark side of a genius who lived and died for love in the last days of the nineteenth century. 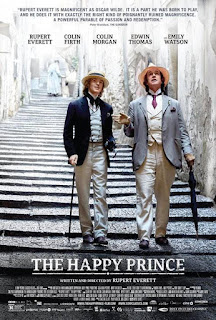 The Happy Prince is in select theaters on November 2nd, 2018.

The last destitute years of Oscar Wilde's life are presented with heartbreaking grimness along with flashes of his former life when he ruled London via the stage with his witty plays. His infatuation and affair with Alfred "Bosie" Douglas (Colin Morgan) followed by being accused of sodomy by his lover's angry father, the Marquise of Queensberry, results in a public trial and imprisonment.

After two years of hard labor Oscar Wilde played by Rupert Everett who is also the director and writer is released and exiled to France. He loses his shattered wife (Emily Watson), his sons and his country. The movie goes back and forth through different phases of his life as the sickly elder man hallucinates about his past life while on his deathbed in a seedy Paris dwelling which passes for his room.

With his face covered in prosthetics and his body bloated up, Rupert Everett brings to life one of the great literary giants to life showing him in the depths of despair but also manages to show flashes of the witty and charming man he once was.

The happy prince does have its downsides. The most obvious being the dialogues, which are unfortunately quite awful at times. Another issue lies in the supporting cast. Bosie is the only side character that makes a serious impact. Emily Watson has about two minutes of screen time. The same goes for Tom Wilkinson and, to a lesser extent, Colin Firth. Their characters are almost entirely wasted.

However, The Happy Prince never quite coheres into an effective portrait of a complicated and contradictory literary figure. Instead it plays as a collection of scenes that are often so broad as to be almost abstract, while crowded with minutiae that obscure what might otherwise be strong thematic statements.