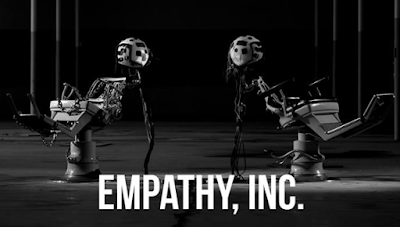 Read Kelsi's review of Empathy, Inc. Hotshot venture capitalist Joel has a multimillion-dollar deal go up in smoke, and he and his actress wife Jessica are forced to move in with her parents and start from scratch. At the lowest and most desperate moment in his life, Joel meets old friend Nicolaus and his business partner Lester, who are seeking investors in a new technology known as XVR—Xtreme Virtual Reality—from their company Empathy, Inc., which is said to offer the most realistic and moving experiences for users by placing them in the lives of the less fortunate. Joel gets the startup its funds but soon discovers that the tech's creators have far more sinister uses in store for their creation and that the reality it provides its customers isn't virtual. 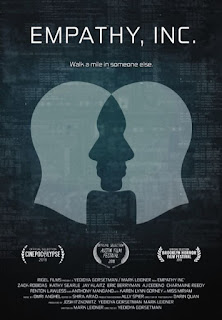 Empathy, Inc was reviewed out of The Philadelphia Film Festival. Release information forthcoming.

Empathy, a new sci-fi movie that explores a not-so-virtual reality, takes you on an unexpected turn of events. Joel, played by Zack Robidas, is having a major life crisis when he finds out his business partner has betrayed him. Losing everything he owns, he’s forced to move in with his in-laws. It doesn’t take long though, before he finds himself investing into another up and coming company with the help of his father-in-law. However, this company isn’t anything it’s portrayed to be.

This entire film is in black and white and starts off sort of weird. I wasn’t a fan of the movie in the beginning, but as I continued to watch it started to get a little better. This film reminded me of an old school episode of “The Twilight Zone.” While the directors explore the possibilities of technology and virtual reality, it will leave you wondering just what kind of technological abilities the future will bring. I do not recommend seeing it in theatres, as it will probably be on Netflix very quickly. That being said, it wasn’t the best sci-fi I have ever seen but it does explore a whole new twist on virtual reality and will leave you questioning the future of technology.