The Smurfs are back at it again. 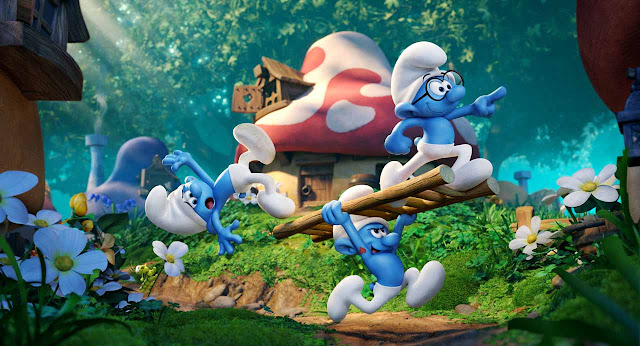 Smurfs: The Lost Village is the third Smurfs movie, this one is fully animated and clearly geared towards a child audience. I believe this film is meant to relaunch this franchise as there are no humans and the overall tone is very different from the prior films.

What is a Smurfette? That's the question this movie is asking.

In the beginning we are introduced to the Smurf village and the Smurfs, each one has a name based on their character trait. We have Brainy, the scientist, Hefty the weightlifter, Clumsy, who breaks things - you get the idea. This is an all male village with the exception of one, Smurfette. It's explained that Smurfette was created by an evil wizard, Gargamel, who created her from clay, therefore she is not a "true" smurf and has no defining characteristic. Which leads to the question...what is a Smurfette?

Smurfette encounters a Smurf like herself in the forest and ultimately, gets captured by Gargamel, the evil wizard. Gargamel wants to capture all the Smurfs and use their life force for his evil magic. He uses a spell and he discovers a lost village where the smurf that was seen in the forest is from. Smurfette ends up escaping with the help of her friends, Hefty, Brainy and Clumsy and they race against the evil wizard to warn the village that they are in danger. When the Smurfs arrive, they are very surprised to find the village is all females. When Gargamel reaches the village he captures all the Smurfs but is ultimately defeated, and in the end, both villages become one happy family.

The animation is suburb, the worlds they create are beautiful. I'm not sure why this is voiced by an all star cast, as this is a children's movie - I don't think they care if Demi Lovato or Julia Roberts are voicing these characters. The movie itself is clearly for children, the humor and jokes miss the mark several times. The music is geared to make kids get up and dance - I just felt like the songs didn't flow with the scenes. This very much felt like another movie to keep a franchise going, it was very predictable and follows the same kind of plot you see in most animated films. If your kids are dying to see this, you will be able to enjoy it as well, there are some funny jokes and the animation is beautiful - just take it for what it is, a film for children.

And to answer the question, the what exactly is a Smurfette? Well, she can be anything she wants to be.