Can These Old Pals Go Out In Style? 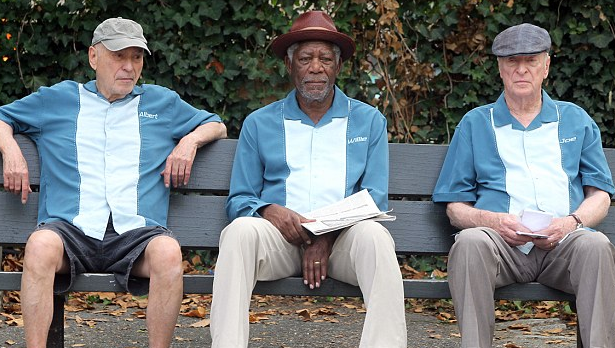 Oscar winning Morgan Freeman, Michael Caine, and Alan Arkin team up in the comedy remake of the 1979 George Burn’s film of the same title Going In Style. The elderly ensemble play a group of lifetime pals, who are struggling to pay bills, in order to be there for their families. Desperate for money, they team up to pull off a bank robbery to save their homes.

This fast paced comedy works very well. It’s pretty much a mix of The Intern (2015) met The Town (2010) and due to the all-star cast, the movie is very entertaining. Michael Caine stands out in the group of friends. He is able to add a charismatic element to the character resulting in the lovable character of Joe. The Oscar winners are also able to add some emotional depth in the film locking viewers onto the screen. Along with the great chemistry of the cast, they make the preposterous concept of old men robbing a bank make sense under their circumstances. With much humor, the majority of the situations are pulled off. This film understands that it is a ridiculous concept but, results in an entertaining picture.

The problem with this film is that it feels very formulaic. It doesn't seem like something original. Also, there is something about the film that doesn't emotionally grasp you. When Going In Style tries to grab you in, it sometimes works but, there are a few noticeable times were you aren't engaged. Finally, this film never has that big laugh that you’d expect from a comedy of its nature, which is disappointing.

Going In Style mostly succeeds for what it is. The movie isn't great but, the Oscar winning cast make the film a fun ride. Once you get past the silly concept, the movie pulls you in for one of the first good comedies of this year. I don't think you need to rush to see this film because, it is not unique. However, it is worth seeing at some point. I think older generations,especially, will find this film funny, as well as, the adults and teens.

I really wish this film just had one gut- busting joke but, it failed in that. Also, as mentioned earlier, when the film wants to be serious, for example when Willie (played by Morgan Freeman) finds out that he needs a new kidney, it didn't make much sense that he wouldn't even attempt to find a donor. And when he was in the hospital, I didn't really care as much as the film wanted me too. Also, the relationship between Joe’s (played by Michael Caine) son-in-law and his granddaughter came out of nowhere. It seemed very forced. I really wished this film had a little more originality to it but, it was still a fun pre-summer film.
_________________________________________
Posted: April 07, 2017
Labels: CabellVildibill17, Reviews17
Newer Post Older Post
Subscribe to: Post Comments (Atom)
Subscribe to Mind on Movies for Movie Screenings and Giveaways.