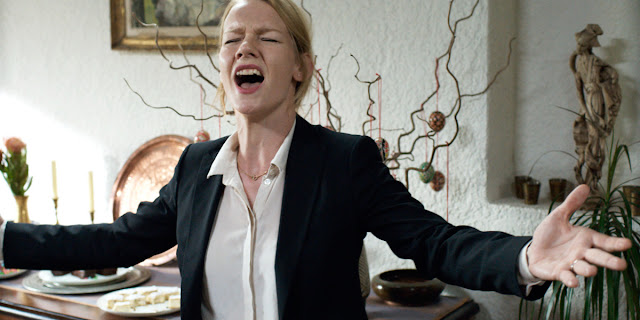 German submission and selected nominee for the Academy Award for Best Foreign Language Film, “Toni Erdmann” is the must see dramedy of the year. The focus of the film is the relationship between comic prankster Winfried Conradi (Peter Simonischek) and his workaholic daughter Ines (Sandra Hüller). Seemingly estranged to start, the father daughter pair couldn’t be more opposite; where Winfried appears wildly (and at times excessively) carefree and easygoing his daughter Ines seems to be too high strung and tightly wound for her own good. The contrast in the pair is apparent from our first sight of them, when we meet Winfried at the start of the film he is already in the midst of one of his obvious pranks, donning some of his ever ready prop pieces to assume a different character and fool around with his slightly amused- but maybe more confused- delivery man. We get the sense that this is not a rare ocurrence.

After this introduction, we follow him through the routine and wacky activities that seem to make up his day, caring for his dog, donning ghoulish makeup to match that of his music students as he has them perform a morbidly comical farewell to a retiring colleague, and leaving the makeup on throughout the day while he visits his mother (whom he seems to spend much time caring for), his ex-wife, her new husband (both of whom he seems to have an amicable relationship with), and a few friends all of whom seem to be so used to his antics that the makeup is met without much surprise and more amused than bewildered questioning. When he does finally decides to wash it off it is only after the belated entrance (after finally getting off her cellphone) of his daughter Ines, whom- though we can see is just as used to her father’s antics as the rest- demonstrates a barely concealed exasperated lack of interest or whimsy. After embracing Ines and getting a bit of his make-up on her crisp white business shirt Winfried finally decides to go to the bathroom and rid himself of his playful makeup. The scene is subsequently followed by an awkward goodbye between father and daughter, in which a harmless (but maybe a little ill-conceived) joke by Winfried is met with a harsh sarcastic (but maybe also a little serious) response by Ines. These first strained interactions introduce us Winfried’s dilemma as a comical father, whose jokester ways always seem to fall short at/with his serious and unimpressed daughter, just trying to find a way to connect the best way he knows how, through laughter.

After her brief visit, her father experiences something that while saddening also reminds him of the shortness of life and the importance of living a happy and fulfilled one. In an attempt to bring that message to his daughter he travels from Germany to Bucarest and completely upends hers routine, work, and life with his unsolicited advice and- at times ill-timed- humor. He does this at first minimally as himself, then eventually and at a larger scale as his alter-ego, life coach/consultant and/or German ambassador (depending on who you ask), “Toni Erdmann.” Ines at first scorns her father and his new ill-conceived identity while Winfried persists in his desire to make her laugh and focus on her happiness. If this film had been made in Hollywood or by someone else, it could easily have been made into a critique of the overly ambitious, solely focused on her career, shrewd and hardened businesswoman with no personal relationships, substituting work for family and success for happiness. But Ade doesn’t paint Ines as a flawed woman, but a strong and complex woman trying to find success, happiness, and herself in a flawed (business) world. It also doesn’t paint her father or his sentiments as her unflawed saving grace; there are consequences to his actions (and jokes). There are times to laugh at life, it can’t be all seriousness and work, but it also can’t be all carefree and humor. The goal, and one of the film’s themes, is finding the balance.

Simonischek and Huller give exemplary performances as the Conradi father-daughter duo. Simonischek is compelling and enjoyable to watch as lovably affable Winfried Conradi and contrived persona Toni Erdmann. And Huller gives an outstanding performance as a smart, sophisticated, boundary pushing businesswoman striving to thrive in a male dominated business, battling with capitalist arrogance and corporate sexism as well as the toll it all takes on her emotional, mental, and spiritual stability. Simultaneously heartbreaking and heartwarming, the amazing complexity and range these actors give to their characters, along with a mix of painfully hilarious and hilariously painful scenes, is a large part of what keeps the lengthy (close to 3 hour) but vastly poignant film compelling throughout. And, with an ending that offers a genuine mix of carthasis and realism, there’s a simply therapeutic payoff.

Awkward and heartfelt, hilarious yet sobering, “Toni Erdmann” is an emotional laugh riot that will move you and your appreciation for comic relief.

I don’t think there was much I would change, but there were a few things I would have been interested in seeing fleshed out a bit more. I would have found it interesting to see some prior scenes with or flashbacks to Ines’ childhood and early relationship with her father and maybe where the turning point (if there was one) was. I would also have been interested in seeing more of a conversation on the immoral business practices shown/discussed in the film. Also, Anca and the woman who invited the Conradi’s to her home both seem like great characters to have fleshed out a bit more or been given a few more lines. But without these changes the film still does a great job of illustrating the father-daughter relationship, touching on the business ethics and issues presented, and introducing an array of wonderful supporting characters.
_________________________________________
Posted: January 27, 2017
Labels: LizMassele, Reviews17
Newer Post Older Post
Subscribe to: Post Comments (Atom)
Subscribe to Mind on Movies for Movie Screenings and Giveaways.