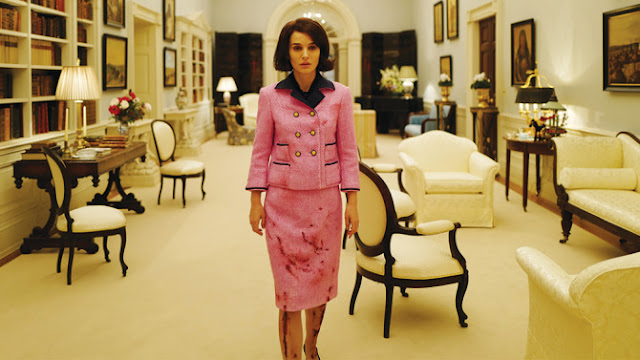 We all know about JFK’s assassination but have you ever seen it portrayed through his Jackie Kennedy’s point of view? Jackie is the film that does just that by focusing on the iconic First Lady during the week immediately after her husband JFK’s assassination. The film takes its viewers into the life of Jackie as she tries to maintain her iconic poise and grace while trying desperately to preserve her husband’s legacy and in their world of “Camelot”.

The plot is set up as Jackie recounting her life with JFK as well as his assassination to a reporter just one week after the tragic event, which tugs at her psyche.

I really liked how the director approached the storyline of how much Jackie Kennedy’s world changed but she didn’t want others to see that. The movie dove into the psychological aspect of just how hard it affected her because of all the secrets he kept from her but she wanted to also protect his legacy, especially since he wasn’t able to complete his term to show his full potential. Even the camera angles and music did a good job at tuning in to how close and intimate the filmmaker wanted to get viewers to feel toward Jackie. Since she was usually portrayed as a debutante and always poise, it was uncomfortable yet mesmerizing to see her try to keep her control and sanity at some points due to her entire life being uprooted because of the unfortunate event that took place.

The film was largely dramatic which made it seem all the more realistic, especially since the Kennedys were known for glamour and fame. Natalie Portman did an excellent job as Jackie who was shaken to the core with the grief but stayed well manicured and kept up the façade of living the life of Camelot. I definitely recommend this movie if you like U.S. history or want to watch a good biography.

Since it was a biography I would have liked the ending to have what Jackie did in her later life like her second marriage, any accomplishments or even her own passing away date but they left it to the viewer to do research on their own.
_________________________________________
Posted: December 21, 2016
Labels: AshleyBell16, Reviews16
Newer Post Older Post
Subscribe to: Post Comments (Atom)
Subscribe to Mind on Movies for Movie Screenings and Giveaways.