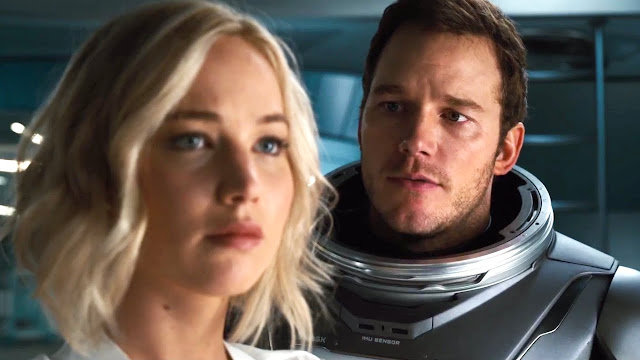 In what appeared to be a no brainer blockbuster, Passengers fails to meet the expectations set by other space films in the genre. An all-star cast consisting solely of Jennifer Lawerence and Chris Pratt should spell instant winner and have universal appeal. So why won't Passengers be blasting off to the box office record charts?

Passengers sets off with thousands of people on an inter-galactic cruise from Earth to one of mankind's colonies beyond the night sky. Making a journey that countless voyagers have made in the past, these passengers are all on their way to their new lives, escaping the overcrowding that plagued Earth. Although the journey takes over a hundred years, to the colonists, the journey only takes the blink of an eye as they sit in suspended hibernation. But unfortunately for a few travelers, they’ve woken up 90 years too soon. Threatened with the prospect that by the time they reach their destination they will be dead, they have to act to find a way out of their predicament. Luckily enough, Pratt is not your average Joe. Through some magical coincidence, the ship's malfunctioning hibernation pods accidentally wake up an expert engineer. Coincidence? I think not. Throughout the first 45 minutes, we follow Pratt as he tries to put himself back to sleep in order to avoid insanity (think Cast Away but in space... and with luxury cruise liner amenities... oh and 5,000 others in hibernation). But as the plot plays out, Pratt finds himself suddenly not alone. And with a much bigger problem on the horizon.

Passengers certainly features some fairly funny moments - as could be expected from Chris Pratt. However, the film struggles to decide what type of movie it's trying to be. From the trailer alone, this film seems like a thrilling science fiction/ disaster action movie a la Gravity or The Martian. But once you sit your booty down in the theater, you quickly realize this is not an action film. Instead, what we get is just kind of… weird. You find yourself laughing along to Pratt’s charm, but there really isn’t enough of this charm to consider this a comedy. You also get your countdowns to impending doom and fast-paced running by the lead characters, but the pace is still slow… so is it really an action film? I mean there are a few explosions… but still, it’s not enough. And then you get this really weird (honestly, that’s an understatement) romance between Chris Pratt and Jennifer Lawrence, with the falling in love montage and everything! But the premise behind their romance just puts a bad taste in my mouth which makes it difficult to consider this a romance film. Additionally, the duo just don’t have much on screen chemistry. Their whole relationship just did not seem to fit the characters. Although this film could have been a nice hybrid of a weird cross-genre film like a high-budget Black Mirror episode, instead it is just unfocused and incapable of truly defining itself. It had a lot of moving parts, and none of them seemed to work together. On the other hand, we also could have been given another generic space action flick like the trailers suggest. But instead we’re stuck with some sad hybrid in between.

That being said, the film did succeed in a few ways. Although it wasn’t cohesive, I still have to give Passengers some major kudos for at least attempting to break out of the sci-fi action box that we’ve been trapped in. There is something to be said of setting a plot in the middle of space that isn’t the action movie we’ve become accustomed to. Who says we can’t have a romance in space? Or a comedy in space? It’s refreshing to see science fiction about more than just explosions and tense, nail-biting suspense. Although a film like Arrival does a much better job of this, Passengers took a bigger risk of really trying to buck the conventions of the genre. I applaud the concept in spite of its execution. Additionally, the futurism in the film is pretty cool too. Their portrayal is a nice change of pace from the used-future, gritty space that is a trend in the genre.

Passengers is bound to get a lot of hate, and I am not going to say that it is undeserved. One of the worst aspects of the film is that it actually had some decent bones, but in the end it is dissatisfyingly a shell of what could have been. That being said, I actually didn’t hate the movie. It’s an interesting concept and it’s a generally entertaining film. It’s difficult to say what audience is going to enjoy Passengers, but it’s interesting enough to get you from point A to point B – a great film to watch while it plays in the background on your TV while preparing Christmas dinner.

The moral dilemma of the film is handled so strangely it’s hard to make everything fit right in my head. So let’s get this straight. The main character chooses to murder someone in the slowest way possible so that he isn’t alone. Is this understandable? Yeah, I guess on some level. But is it okay? No, not at all. I can’t hate on the idea of including this in a film, but I can certainly hate on the execution of it. If handled in a realistic, dark way, I think we could have had a great, edgier film. We see glimpses of this – when Jennifer Lawrence’s character realizes what happened to her, we get this really intense, great scene that makes you really feel for her character. We get the feeling there are real stakes and it makes you think you’re going to get an interesting perspective into the morality of this decision. But then you end up with her eventually just forgiving him in typical rom-com fashion. And the flashes of rom-com montages of them dancing along to a digital DDR or playing Basketball just made me feel uneasy when the entire time you know the real betrayal that’s beneath all of it. It’s just unsettling how upbeat and superficially the film handles their romance. It’s almost like there are two movies – the movie where we get Chris Pratt begging himself to not take her out of her pod that makes us question our morality, and then we get the movie where we have them eating popcorn out of a shared bucket at the movie theater without a care in the world. If they had just committed to it being one way or the other, I could have respected the film more. But instead it just didn’t come together cohesively. We get a happy-go- lucky romance movie based on this really disturbing moral decision. I would’ve been more than happy with rom-com in space or edgy, dark, thought-provoking think-piece; but I’m not happy with them in the same film.

Additionally, I just did not like the cliché-ridden finale. Speaking of which, the ending really didn’t jive with the first 2/3 of the film either. They try to shoe-horn in this action plot where the ship is sinking and they have to make these crazy moves to save themselves and the thousands of people on board. It didn’t fit with either the romance or the dark parts of the film. But what really bothered me is that in the scene where the reactor is melting down, I could not stop rolling my eyes. Is the door not going to open? Yep. Is the tether holding him in going to snap? Of course. Is she not going to be able to reach him? Duh. Are they going to pretend like he’s dead only for us to figure out he’s not? Oh my god, yes… yes, they are really going to include all of those overused tropes. All in the span of ten minutes. I just couldn’t handle it.