A Video Game as a Movie? But Why? 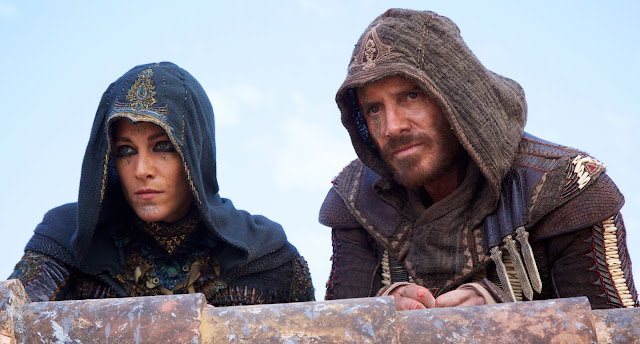 As a fan and former avid player of the bestselling game, I was truly excited for the Assassin’s Creed movie. With a such a high quality cast headed by Michael Fassbender and Marion Cotillard, how could it not be great? Especially following their recent success with Kurzel in “Macbeth”. But despite the rich potential of the source material and exceptional talents present, the film’s plot and characters are seriously lacking in development.

Our protagonist is Callum Lynch (Fassbender), a man from a difficult past and an even more complicated history than he knows. His troubled youth leads Cal to a life of crime and cycle of violence that ends up with him on death row, sentenced to and seemingly carried through execution by lethal injection. That is until he wakes up from his “death” in Abstergo Industries where Sofia Rikkin (Cotillard) and her father (Jeremy Irons) use her scientific research and discoveries to educate and connect Cal with his ancestral history and the Assassin’s Creed. They use their virtual reality “animus” machine to access his “genetic memory” and send him into a VR experience of his ancestor Aguilar’s final battle during the Spanish Inquisition against the Creed’s historical enemies the Knights Templar. The Rikkins, members of the modern day Templars, attempt to manipulate and barter with Cal to gain the memory of where his ancestor hid the much sought after “apple of Eden” which contains the “genetic blueprint for free will”, which daughter and father Rikkin (and the other Templar elders) wish to claim in their war against violence (allegedly) and the Creed.

The film operates within the world of the AC video game but with what initially seems to be an interesting and original story line. Set in a fictionalized version of history heavily rooted in a mythic battle of Assassins against Templars the opportunity for creative exploration seems boundless. But while the cinematography is as visually arresting as a video game film could be, albeit a bit overindulged in, the centering of the story around such weak character connections, development, and a macguffin-like plot device (i.e., the apple) weakens the entire experience.

Sofia’s whole seemingly altruistic desire to use the apple to “cure violence” rings hollow due to our lack of in depth understanding of her character and motivations. The other Abstergo “subjects” (or rather inmates), for a while, seem to be too hostile and wary of Cal and their predetermined betrayal to focus on their own captivity and escape from it. Everyone’s motivations and loyalties are so hard to place that you’ll spend a good part of the film just trying to figure out who can be trusted or empathized with, and not in what seems like a creative “keep them guessing” kind of way, but from sheer confusing connections and flip of the coin change in attitudes.

Game lovers will enjoy the action sequences, from the aerial shots of the exciting and death defying chases through Andalusia to their projections in the current day lab scenes where Cal is mirroring, or “synchronizing”, with his ancestor. But I question whether or not sacrificing a bit of the more unnecessary (and less significant outside of the videogame) shots and screen time given to them might have resulted in more time for actual character and plot development. Unfortunately, you spend most of the first half of the film waiting for the excitement of Cal’s transportations back to his past while struggling to fully understand the mundane present day circumstances. Whether or not you played the game there are plenty of places to easily feel left behind.

There’s also a bit of over dramatization that seems aimed at making up for a lack of substantive narrative. From one random musical scene where Cal seemingly loses his mind for 5 mins to his strange initial introductions and melodramatic conversations with his fellow subjects that have him mouthing “WHAT THE FUCK IS GOING ON?” with the audience echoing. It’s all so awkward and misfitting that you can’t help but share in his incredulous and insane chuckles.

The fantastical, leaning on magical, elements increase as the film goes on making it harder to take anything seriously as it continues. The film is supposed to be an action-fantasy, but the fantasy overwhelms the action. And while the action is, again, pretty awesome, the story’s depth, or lack thereof, makes much of the viewing experience feel like just watching a VR version of the video game being played out in front you.

While there are a few that I have enjoyed, I’m not a huge fan of the videogame-to-film adaptations; I believe and understand that they can be difficult to transition well. And while objectively, ignoring the caliber of the cast, crew, and material, I’d say this was an alright movie, with so much talent and potential in this film, it’s hard not to feel like it was wasted.

Two glaring mistakes to me were 1) the casting of Michael K. Williams as Moussa/Baptiste. He played the character so awkwardly and just felt completely misplaced; it was actually painful listening to and watching his portrayal of the character . For 2) I know I already mentioned the need for more background and development of characters but I would SOOO have focused on Aguilar more. He is the most interesting character in the entire film and though the plot centers around his genetics, lineage, “memories” and actions, as does the majority of the action of the film, his actual life and story just seem to fall into the backdrop of the film. That could have and should have been delved further into.
_________________________________________
Posted: December 21, 2016
Labels: LizMassele, Reviews16
Newer Post Older Post
Subscribe to: Post Comments (Atom)
Subscribe to Mind on Movies for Movie Screenings and Giveaways.