If you saw Despicable Me, then you already know pretty much everything there is to know about the minions. If you are one of the few, smart, adults who missed out on the first one then you're in luck. Despicable Me and its sequel do not really relate to each other. You can see this one without knowing anything from the first one and still know what's going on.

I am one of the few people around whom still like Steve Carell, but for those who hate Carell you are in luck again. Since this is an animated movie, you won't have to deal with seeing Carell, and because he plays a guy with an accent, you won't recognize his voice.

Do remember going in that this is a kid movie, and there is a simple plot and simple solution to the movie. On the other hand, there is humor in this that adults will find funny. It goes right over the kids heads and into your mature noggin. 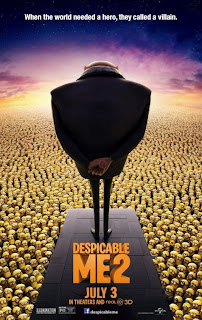 What would I have changed? (Spoilers)
The minions are the funniest thing in the movie. They need to add camera time with the minions.