If Blue Collar Comedy can do it, so can Kevin Hart?

Going in this movie you may think, "hey, I'm going to see Kevin Hart preform stand up, that's gotta be funny." Well the movie is about an hour and sixteen minutes long. Within the movie, the first fifteen minutes it was trying to act as a movie, not him doing stand up, then the next fifteen minutes, we were taken to other countries where we hear audience reviews on his performance. Finally for the last forty minutes it was him doing stand up.

Now you may be thinking, wait an hour and sixteen minutes and only seventy minutes were accounted for, what happen to the other six minutes? Well during the credits there is almost six minutes worth of movie. Stay and watch it, it was really funny to see those parts, they should have been in the movie.

Stand up review - Well Kevin Hart is a funny man. There was a joke he made about bums that was really funny. As he called it the #bumbump. When you see the movie when it's on Comedy Central understand. Other than that joke, the other ones where not really that funny. 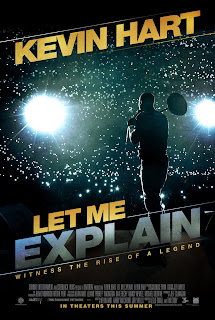 What would I have changed? (Spoilers)
Well I would have made the whole movie his stand up performance, then it would have made a difference, because we would have had more jokes to laugh at other than the few we heard. They should have added the credits scene in the movie. It would have flowed better then.