The Lone Ranger or The Lone Tonto?

As you may have noticed this from the trailers of Disney's new movie The Lone Ranger, Johnny Depp plays Tonto, side kick to The Lone Ranger. Some people have been saying that Johnny Depp just plays Captain Jack Sparrow from The Pirates of the Caribbean. You can defiantly see the similarities between the two characters, but Johnny Depp can pull both off.

Ideally they could have named this The Lone Tonto because Johnny Depp steals the show. As this is true with most movies Johnny Depp is in. A side note, in the movie, Johnny Depp preformed all of his own stunts. Which you can read about HERE.

This movie will keep you going through the entirety of the movie. This movie has great action scenes, and is really out done with the way it is preformed and done. Especially the last twenty-five minutes. You will defiantly want to see this movie over the Fourth of July weekend, as this movie will appeal to all audiences young and old. 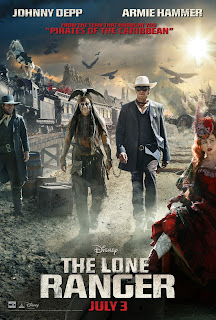 What would I have changed? (Spoilers)
Well first off, I would have showed us (the audience) how Tonto escaped from the jail cell. I was disappointed they did not show how. I also did not like the love interest triangle. It is the wrong message for anyone to see.