Can someone really rob Paris Hilton? 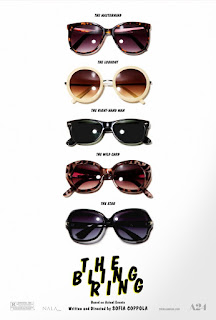 Well in the movie case, yes. This movie really was not good. It is a bad movie for kids in high school to watch. It is not really for anyone to watch.

The movie really only had one thing for it. Which was Emma Watson. But other then that this movie just didn't have anything. This movie was just to over the top with everything, and any chance they could show us, they had the kids doing drugs. I understand that this movie was based on actual events, but they didn't need to add that much.

This movie showed that people who live in California live laid-back, and to much laid-back at that. The show them doing nothing all the time. This movie also showed celebrity's not have any security system. If Paris Hilton doesn't have an alarm system in her own house, then she deserved to be robbed.

This movie also didn't have a time period. Per Google the robberies happen in 2008 and 2009, but they never said that in the movie, and it seemed like it was really up to date. Wait to see this movie when they air in a thousand times on the Life Time channel. This way when you see how stupid it is, you get a chance to change the channel and not watch it.

If you want to know more about the actual Bling Ring CLICK HERE.

What would I change? (Spoiler)
Well this movie was based on actual events, so I can't really change the story line. However, I can say that they shouldnt have added so much drug use in the movie. Also the one girl had a gun go off in her boyfriends/guy friends house, and no one heard this, hard to believe no one heard this.