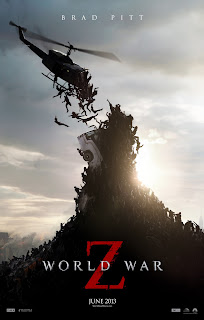 Another movie about zombies. Didn't the zombie craze end last year? Well don't speak to soon because World War Z is a better movie then those zombie movies last year.

World War Z was actually a really good movie. This movie had everything a great movie needs. There wasn't that much gore, not to much violence. It had its family aspect with Brad Pitt and kids, it had its good amount of mystery on how it all started. It had great action in the movie.

Brad Pitt was vary impressive in the movie. World War Z will keep you on the edge of your sit during most of the film. This is a very exciting film. You will not stop watching the screen.

This movie had so many highlights that there was only one problem in this movie which was the Zombies were too comical, the way they acted in the movie was just too funny to not laugh at. I wish they had made them a little more scary.

Lets play a little game, see if you spot Mathew Fox in this movie, comment below if you do.

What would I have changed? (Spoiler)
Well I would have made the zombies a little more scarier. I would also have given the answer as to how this all started. In the movie, they never figured out how it all started. Also I would have tried to cast someone better to play Brad Pitts wife.