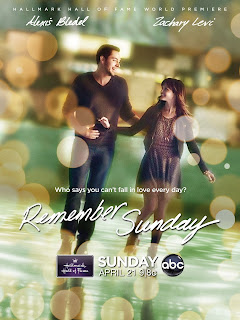 Last night ABC aired a made for TV movie named Remember Sunday. I decided to watch it because of the amount it was pushed on the network. The movie is about Gus (Zachary Levi) who had a brain aneurysm and thus has short-term memory loss. He falls in love with a waitress Molly (Alexis Bledel). So your thinking you have already saw this movie, 50 First Dates with Adam Sandler. This movie was surprising not the same as Adam Sandlers movie.

The acting was done really well, and this was much more heart felt then the other version 50 First Dates. This was probably due to the fact that this was also produced by Hallmark. But it was still not a bad movie at all. Actually what was really done well, was the commercials. Since this was on TV, there were commercials every 15 to 20 minutes. They were all Hallmark card commercials. But the commercial latest for 3 minutes. So these commercials had enough time to tell the story and wrap it up in the end. I was impressed by the acting in the commercials, and the joy in brought me. You will have another chance to watch this TV movie on the Lifetime Channel on April 28th. 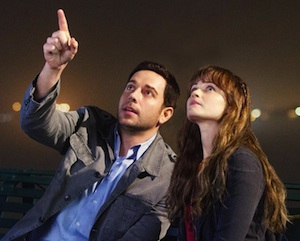