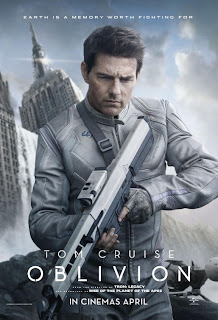 So you wanna know if Tom Cruise can pull off his roll in the new movie Oblivion. Well he does. This movie was very different from other movies. Although I could predict after about 15 minutes. It was still good. You have to be able to pay attention to the details so you know whats going on. If you don't, they recap it in the end of the movie. So the movie starts off a tad bit slow. But it does pick up on the mystery of the movie as it keeps on going.
If you want to see who would win in a fight with Tom Cruise, it is the Tom Cruise himself. Morgan Freeman was a great supporting role in the movie. This movie was made really well with all the graphics. It had great action scenes. This movie just about had everything that a movie needs in it.
I would recommend waiting to see this one on DVD. This was you can watch it over and over in a row until you get the understanding of the movie. Although, I only saw the movie the one time and I was able to understand all of it. And I was able to explain it really well to the people who didn't understand it after the movie.

Interesting Fact - Olga Kurylenko who played Julia, the red head lover of Tom Cruise in the movie, was in a movie called Land of Oblivion. A movie about the few years before Chernobyl.

What would I change in the movie? (Spoiler)
This movie was really done well. That being said I would have had a different actress for Julia, Tom Cruises work partner in the movie. They should have picked a famous women. Maybe they could have gotten Jennifer Garner. She would have played the part really well. I also would have involved Morgan Freeman some more. He is a great actor.
Posted: April 19, 2013
Labels: Reviews13
Newer Post Older Post
Subscribe to Mind on Movies for Movie Screenings and Giveaways.