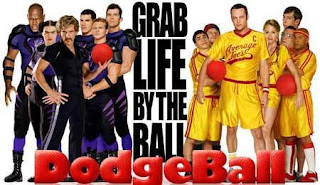 So you want some more DodgeBall? Well you got it, Century Fox is in the works to make a sequel to the original comedy from 2004. They have hired a writer, Clay Tarver, he was a guitarist for Bullet LaVolta in the 80s/ Maybe he will write in some of that 80s comedy.

Red Hour Productions will produce the movie, Red Hour is owned by Ben Stiller himself. But the question is, are Ben and Vince going to star in the sequel? Well according to sources, 'DodgeBall 2' will see the gym owners reluctantly "team up to fight an even bigger threat".
So that is a good sign they will both be in this movie. I am looking forward to this, as long as the threat is not aliens like in their last movie The Watch.