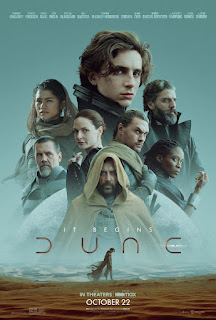 - A mythic and emotionally charged hero’s journey, “Dune” tells the story of Paul Atreides, a brilliant and gifted young man born into a great destiny beyond his understanding, who must travel to the most dangerous planet in the universe to ensure the future of his family and his people. As malevolent forces explode into conflict over the planet’s exclusive supply of the most precious resource in existence—a commodity capable of unlocking humanity’s greatest potential—only those who can conquer their fear will survive.

Dune is the first half of an adaption of the novel released in 1965. It’s the sci-fi epic that helped inspire George Lucas to make Star Wars, and yes you read me correctly, this movie is actually a Part One. The novel is massive, and instead of forcing everything it has into one movie, the director, Denis Villeneuve decided to cut the book half, and I’ll tell you right now, I thoroughly enjoyed it!

While I am normally hesitant of “part one” movies, because they usually lack conclusions to their stories, Dune Part One feels more like Fellowship of the Ring in its ending, meaning you’ve gone on a long journey, and had 3-acts of storytelling, but that journey is far from over.

Denis Villeneuve is a phenomenal director but has had an interesting filmography in my eyes and other movie-goers. His most recent film before Dune was Blade Runner 2049, which bombed at the box office, and while some call it a masterpiece, others like me left the theater confused as to what the movie even was. On the other hand, Villeneuve has made other fantastic movies such as Sicario, Arrival, and possibly my favorite movie of all time, Prisoners. So needless to say, I was very interested to see what Dune would be with him behind the camera, and I think he knocked it out of the park.

The cast of this movie is stacked full of stars. Lead by Timothée Chalamet and Rebecca Ferguson, who are both fantastic, it also stars Oscar Isaac, Zendaya, Javier Bardem, Josh Brolin, Stellan Skarsgård and Jason Momoa! When a cast looks like Dune’s, it really is the director’s job to make sure everyone is great, and Villeneuve did not disappoint here either. Everyone feels locked in, and while many of these actor’s roles are side characters, like a Star Wars movie, every single performance feels real, and true to the world that’s being built on screen.

Many of you reading this review may have seen the previous Dune movie from many years ago, or have read the novel, but I’d also guess many are like I was, and are going into this movie almost completely blind to what it is. What I want to say to those people is don’t let being clueless deter you from watching! Although there is A LOT going on, I think what is meant to come across to the audience is done well, while also having many mysteries and reveals throughout the movie kept from us until necessary or not resolved at all yet in this Part One.

Please go see Dune on the biggest screen that you can, preferably IMAX because it was shot for that experience! It is massive in scale, beautiful to look at, and for many of you, is a brand-new sci-fi world for us to experience many stories told on the big and small screen! There is a television series already green lit, and its true sequel is also on the way, so prepare for more Dune! Once you have seen it, come back to this review, and let us know your thoughts!