'Shang-Chi' a true MCU epic by the end! 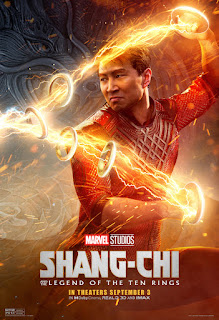 'Shang-Chi and the Legend of the Ten Rings' opens in theaters on September 3rd, 2021.

The newest film in the MCU is here and it’s a brand-new character debuting in Shang- Chi and the Legend of the Ten Rings! I have been very excited for this one and while I don’t think it’s a perfect movie, I had a TON of fun with it!

Shang-Chi is played by MCU newcomer Simu Liu, and let me tell you, he is fantastic. He is such a likeable actor, and immediately helps the audience fall in love with this character. You can also see that he does many of his own stunts, this man talented! Shang-Chi’s father is played by the legendary Tony Leung! MCU villains have a reputation for not always being the strongest, but he is a great character with a lot of depth, and I really enjoyed him! Awkwafina also stars in this movie as Shang-Chi’s best friend, and although sometimes she isn’t my favorite actress, I think she was really funny and enjoyable in this one.

I must admit, the family dynamic in this movie is one of the best parts of it, but where this movie truly shines is in its action. The action in the first half of this movie is easily the best we’ve ever seen in the MCU. The hand-to-hand combat and choreography are top notch and I really wish they could’ve kept it going it the latter half, but the fighting gets more magical by that point, which is understandable.

When it comes to negatives, in the plot, our characters have a lot of mysteries to figure out, and many of those helpful answers come very conveniently. Sometimes I just wish the writers had found a more impactful way to get our characters through this story. They didn’t ruin it for me by any means, but I audibly said, “well that’s convenient” multiple times. Besides that and maybe some of the jokes not landing with me as much as I’d like, I really enjoyed Shang-Chi! It starts off small and ends up being a true MCU epic by the end, and I’m definitely excited to see where these characters go from here!

Also, don’t forget, there are both a mid and post-credit scene for this one, so don’t leave the theater too soon!