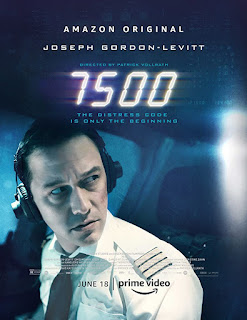 - Read Nick's review of '7500.' A pilot's aircraft is hijacked by terrorists.

Patrick Vollrath, in his directorial feature debut, takes the one-room film to new heights in 7500. In this claustrophobic thrill ride, led predominantly by Joseph Gordon-Levitt as co-pilot Tobias, a flight from Berlin to Paris is hijacked by terrorists. With an abundance of hijack and rescue films to date, 7500 shows potential with a unique perspective on the sensitive subject matter: taking place almost entirely in the cockpit.

The initial shots are disorienting and unsettling but alert the viewer to what is about to happen. Security footage in the airport, layered by the white noise of airplane engines, follows multiple men through TSA- the “random” racial profiling does not sit quite right- and the terminal indicating their covert weapon construction out of glass bottles. These shots, including a monitor for the pilots to see the first-class galley, are the only scenes that occur outside of the cockpit. The film builds tension and immerses the viewer efficiently by using natural sounds without a score, quick editing, a confined set, and technical jargon between the pilots.

However, the simple and intense concept that plays on many of our fears starts to work against itself, running dry about halfway through. The “7500,” air traffic control code for aircraft hijacking, that occurs not even twenty minutes in presents the inevitable question too early: will they succeed or will Tobias maintain control? Even though the film has a short 92-minute runtime, I imagined a variety of quicker endings for the long-winded and detached second half. With nowhere else for this script to go, the remainder becomes filled with an unbelievable and romanticized scenario in which the trained terrorists begin to hesitate with their mission. Vollrath, nominated at the Academy Awards for his live action short, “Everything Will Be Okay,” just might need more time to navigate away from his short film successes before he directs a worthy feature. Besides, it seems like a problematic decision for an American film company to produce this German director’s first feature, a country forever changed and still triggered by the harsh memories of 9/11.

While 7500 adds something to the established genre, hopefully films yet to come will ensure they don’t have plot holes that help crash their figurative plane. 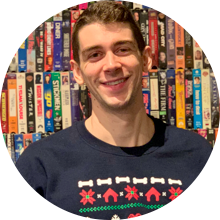