'Birds of Prey' is choppy and chaotic! 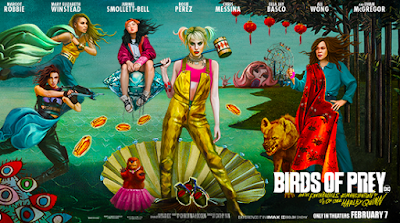 - Read Josh's review of Birds of Prey. You ever hear the one about the cop, the songbird, the psycho and the mafia princess? “Birds of Prey (And the Fantabulous Emancipation of One Harley Quinn)” is a twisted tale told by Harley herself, as only Harley can tell it. When Gotham’s most nefariously narcissistic villain, Roman Sionis, and his zealous right-hand, Zsasz, put a target on a young girl named Cass, the city is turned upside down looking for her. Harley, Huntress, Black Canary and Renee Montoya’s paths collide, and the unlikely foursome have no choice but to team up to take Roman down. 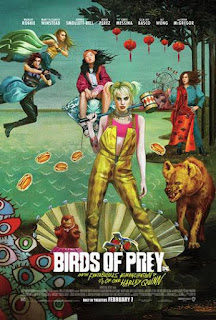 Birds of Prey )and the Fantabulous Emancipation of One Harley Quinn) is in theaters on February 7th, 2020.

There's a lot going on with Birds of Prey. The acting in this movie is quite good from every. Margot Robbie continues her portrayal of Harley Quinn seamlessly from the previous Suicide Squad movie. She continues to be a fun, likeable character and has done a really great job bringing out the cartoony Harley Quinn we all know from the Batman comics. Ewan McGregor as the disturbing Black Mask character has a very believeable sinister personality that's hard to take your eyes off when on screen. Jurnee Smolett-Bell as Black Canary was an interesting character and very likable, though I felt her being the only character with actual supernatural powers was a bit out of place in the film (I'll let you decide for yourself). Mary Elizabeth Winstead as Huntress was probably my favorite character in the movie. She definitely did not get enough screen time with as much time they gave to her back story.

The story line was choppy, chaotic and hard to follow at times as it jumped back and forth in time. We are presented a plot that jumps all over the place with, in my opinion, a lackluster conclusion. There was so much that could have been done with the diamond heist idea, but I'll refrain to avoid spoilers here. Most interesting to me was how they portrayed Harley Quinn as an anti-hero by showing her brutally demolishing the mercenaries that are trying to track her down, but avoid showing her killing police with a during the police station raid scene (good on the studio for this one IMO). This movie has a lot of the same issues Suicide Squad had, but if you're able not over analyze the movie, this is a fun movie to watch.