'The Gentlemen' has a Solid Second Act 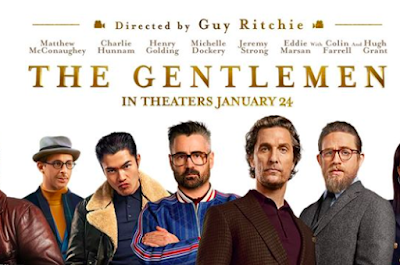 - Read Logan's review of The Gentlemen. From writer/director Guy Ritchie comes THE GENTLEMEN, a star-studded sophisticated action comedy. THE GENTLEMEN follows American expat Mickey Pearson (Matthew McConaughey) who built a highly profitable marijuana empire in London. When word gets out that he’s looking to cash out of the business forever it triggers plots, schemes, bribery and blackmail in an attempt to steal his domain out from under him (featuring an all-star ensemble cast including Charlie Hunnam, Henry Golding, Michelle Dockery, Jeremy Strong, Eddie Marsan, Colin Farrell, and Hugh Grant). 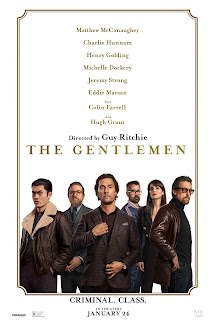 The Gentlemen is written/directed by Guy Ritchie, and stars Matthew McConaughey, Charlie Hunnam, Hugh Grant, Michelle Dockery and Henry Golding. This very R-rated crime/thriller is a January release, and for a January release, I was pleasantly surprised!

The basic plot of the film without giving spoilers is that McConaughey is a drug lord in London planning to sell his empire, and once that knowledge gets out, many people will do whatever it takes to get what he has. With this plot, McConaughey is given a fair amount to do, Michelle Dockery is great as his badass wife, but the standout for me is Charlie Hunnam, who plays his right-hand man. I usually struggle to enjoy Hunnam in movies, but he probably has the most screen time of everyone in the film, and he does a great job with what he is given. Henry Golding, of Crazy Rich Asians fame, plays a real jerk of a character, and does a great job with it. You can tell he’s having a blast being so terrible. Colin Farrell also has a small role here, and he has some of the funniest moments of the film.

With all of that being said, and although I was pleasantly surprised overall, this film is nowhere near perfect. The way Guy Ritchie decides to tell the first half of this story is incredibly frustrating. For the first 45 minutes or so, I thought this was exactly what I expected from a January release, I honestly thought it was pretty terrible. It wasn’t any of the actors or their performances fault, the script and direction was incredibly frustrating. Without giving too much away, the first half of the film is somewhat narrated by Hugh Grant’s character, a nosey journalist with more charisma than anyone could ever have. One big problem is, the character randomly decides to throw in details that are untrue, and you see them play out on screen, not knowing they are lies until after. He also is jumping around all over London attempting to build this drug empire world very quickly, and it becomes incredibly confusing.

Thankfully, Hugh’s narration only lasts about half of the film, the world and characters are set up, and the rest of this movie is a blast. Twists and turns that I wasn’t expecting, the action picks up and things get crazy. It has to be pretty good if it saves the first half of this script. I’ve talked to multiple people who think that if the first half was on par with the second, this movie could’ve been released a month earlier and had some award buzz going for it.

Overall, I definitely recommend The Gentlemen if you’re into very R-rated films with solid performances all-around. I might even want to see it a second time just to experience the second half again and try to pick up on things revealed at the end of the film. There is somewhat of a “grand reveal” scene at the end that attempts to explain things that have been going on in the background that you never noticed but it rushes through them and doesn’t allow the audience to really take them in.

Check this one out in theaters and let us know what you think!