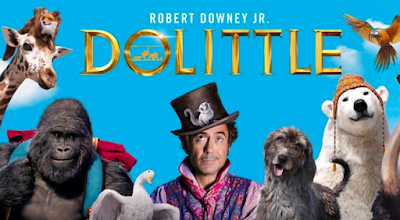 - Read Ashley's review of Dolittle. Robert Downey Jr. electrifies one of literature’s most enduring characters in a vivid reimagining of the classic tale of the man who could talk to animals: Dolittle.

The eccentric Dr. John Dolittle (Downey), famed doctor and veterinarian of Queen Victoria’s England, hermits himself away behind the high walls of Dolittle Manor with only his menagerie of exotic animals for company. But when the young queen (Jessie Buckley, Wild Rose) falls ill, a reluctant Dolittle is forced to set sail on an epic adventure to a mythical island in search of a cure.

The doctor is joined on his quest by a young, self-appointed apprentice (Dunkirk’s Harry Collett) and a raucous coterie of animal friends, including an anxious gorilla (Oscar® winner Rami Malek), an enthusiastic but bird-brained duck (Oscar® winner Octavia Spencer), a bickering duo of a cynical ostrich (The Big Sick’s Kumail Nanjiani) and an upbeat polar bear (John Cena, Bumblebee) and a headstrong parrot (Oscar® winner Emma Thompson), who serves as Dolittle’s most trusted advisor and confidante. 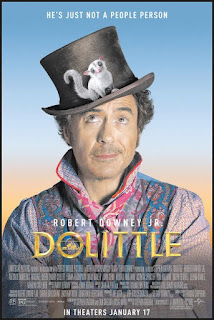 Dolittle is a film starring Robert Downey Jr. as Dr. John Dolittle set in Queen Victoria’s England. After a tragedy, Dolittle becomes totally eccentric and shut off from the world. This comes to a halt when the queen falls ill and needs his help to save her life. Can his adventure bring new life to this already told story?

At first glance, Dolittle is fun and exciting. The eye-catching visuals are enough to grab the audience’s attention as soon as the movie starts. The jokes that come shortly after pull the audience in even more. Hearing familiar voices from actors like John Cena, Octavia Spencer and Tom Holland is a nice addition to the mix.

This excitement of the possibility of this being a movie to remember died down however about midway through. The dialogue became dull and the story felt rushed and heavy with its many directions. By the time it got to the end, I was relieved at how short the movie turned out to be.

Dolittle is a movie where you should go in with low expectations so you can feel satisfied. Despite its humor, it is not enough to make up for the plot that takes viewers on a journey all over the place. If you are invested in the story though, stay until midway through the credits for an extra scene.