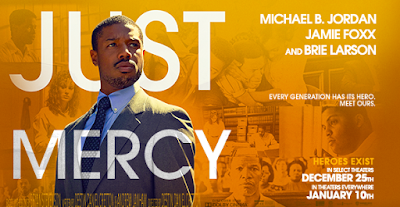 - Read Ashley's review of Just Mercy. “Just Mercy” is based on the powerful and thought-provoking true story of young lawyer Bryan Stevenson (Jordan) and his history-making battle for justice. After graduating from Harvard, Bryan had his pick of lucrative jobs. Instead, he heads to Alabama to defend those wrongly condemned or who were not afforded proper representation, with the support of local advocate Eva Ansley (Larson). One of his first, and most incendiary, cases is that of Walter McMillian (Foxx), who, in 1987, was sentenced to die for the notorious murder of an 18-year-old girl, despite a preponderance of evidence proving his innocence and the fact that the main testimony against him came from a criminal with a motive to lie. In the years that follow, Bryan becomes embroiled in a labyrinth of legal and political maneuverings, as well as overt and unabashed racism as he fights for Walter, and others like him, with the odds—and the system—stacked against them. 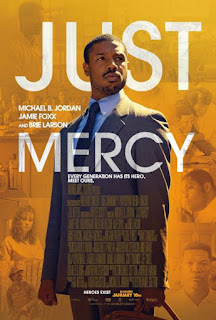 Just Mercy is based on the true story of lawyer Bryan Stevenson (played by Michael B. Jordan) and his fight for justice for the wrongfully condemned in the American justice system. After graduating from Harvard, he moves to Alabama where he meets several men on death row, including Walter McMillian (played by Jamie Foxx) who faces execution for the murder of an 18-year-old woman in 1987 despite no evidence of him doing so. Can Just Mercy provide enough conviction of the truths of this story?

Based on the best selling novel from Bryan Stevenson, Just Mercy is a compelling story about how the power of believing in the truth and having unwavering determination can make a change. Set in Alabama during the late 1980s and continuing into today’s time, this film shows that racism and prejudice are not a thing of the distant past. The performances from the cast truly sets this film apart where the story comes to life from such a difficult background. The emotions from the audience where at an all time high where I heard groans from viewers at the hatred shown in the film and also cheers from the perseverance against the hatred and bigotry.

Even though the subject matter is heavy, Just Mercy finds a way of being merciful and showing a different side of death row than people may think at first glance. The director, Destin Daniel Cretton, shows those waiting for execution as humans with real stories and the harsh reality of how capital punishment affects not only the people awaiting it but also their loved ones. There are times where I laughed with them and other times where the emotions were so heavy that my heart dropped with how masterfully depicted their stories were.

Just Mercy takes a devastatingly emotional and powerful topic and intertwines it with a compelling message that is sure to be talked about for years to come. It opens up a conversation that is still relevant today by demanding attention and to be heard with its moving performances and powerful story. Make sure to stick around during the credits to learn more of the history surrounding the stories depicted