'The Wave' gives you a bad trip 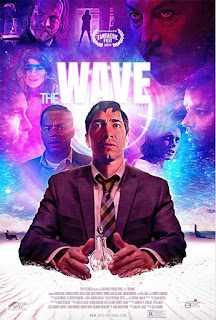 - Read Joanna's review of The Wave. Justin Long (Die Hard 4.0, Accepted, the recent Jay and Silent Bob Reboot) and Donald Faison (Scrubs, Clueless) lead the unique modern-day parable that follows Frank (Long), an opportunistic insurance lawyer, who thinks he’s in for the time of his life when he goes out on the town to celebrate an upcoming promotion with his co-worker, Jeff (Faison). But their night takes a turn for the bizarre when Frank is dosed with a hallucinogen that completely alters his perception of the world, taking him on a psychedelic quest through board meetings, nightclubs, shootouts, and alternate dimensions. As Frank ping-pongs between reality and fantasy, he finds himself on a mission to find a missing girl, himself… and his wallet.