'Knives Out' is Smart and Keeps you Guessing - Logan's Review 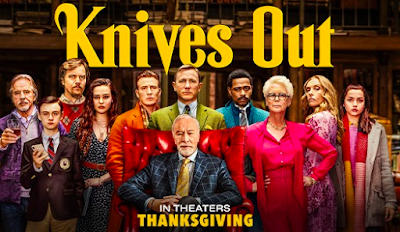 Read Logan's review of Knives Out. Acclaimed writer and director Rian Johnson (Brick, Looper, The Last Jedi) pays tribute to mystery mastermind Agatha Christie in KNIVES OUT, a fun, modern-day murder mystery where everyone is a suspect. When renowned crime novelist Harlan Thrombey (Christopher Plummer) is found dead at his estate just after his 85th birthday, the inquisitive and debonair Detective Benoit Blanc (Daniel Craig) is mysteriously enlisted to investigate. From Harlan’s dysfunctional family to his devoted staff, Blanc sifts through a web of red herrings and self-serving lies to uncover the truth behind Harlan’s untimely death. With an all-star ensemble cast including Chris Evans, Ana De Armas, Jamie Lee Curtis, Don Johnson, Michael Shannon, Toni Collette, LaKeith Stanfield, Katherine Langford and Jaeden Martell, KNIVES OUT is a witty and stylish whodunit guaranteed to keep audiences guessing until the very end. 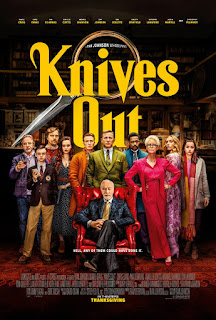 Knives Out is the new murder mystery from writer/director Rian Johnson. It’s full of twists and turns performed by an all-star cast, and guess what? It’s great!

I had a ton of fun with Knives Out. It’s told in a way unlike any murder mystery I’ve seen before, but I won’t get into specifics so that you can experience this film to the fullest yourself! What I will say is that it’s very unique by making the audience think they know the full story, over and over again. Johnson gives us a lot of information in the beginning, and you immediately think you know what this movie is and where it’s going, until you don’t.

I’m usually critical of murder mysteries because I over-analyze these types of movies, I demand I nice bow tied around the story by the end or I leave the theater upset, and I can say that I left the theater very happy. I get frustrated when writers add details to characters and story that end up just being a distraction, so the audience is clueless until the end, but Knives Out does nothing of the sort. Every character and what secrets they hold are given to the audience directly, and by the end not one sentence in this film doesn’t come full circle and show its importance.

Knives Out is led by Ana de Armas, who is fantastic in this role. I cannot wait to see her in more films because she deserves the spotlight after this one. Daniel Craig is the lead investigator in this case, and you can tell that he had fun in this role, taking on a country, somewhat Cajun accent while also being the top-notch private eye. The other big stand out in this one is Chris Evans, who plays a spoiled brat of a man that hasn’t worked for anything in his life, and he’s proud of it. Chris must have enjoyed playing this character because it’s so drastically different than his own personality or characters he’s portrayed in the past.

I strongly urge you to see Knives Out in theaters. I think this one will be a modern-day classic that you’ll watch on TV any time you see it on once it reaches cable. Rian Johnson took the genre, flipped it on its head, and had a ton of fun doing so, while also understanding that an audience isn’t full of idiots. He has an incredibly smart script that really shines by the time you get the grand reveal monologue that every murder mystery has. Check it out and let us know what you thought!