'Frozen 2' Does not live up to the Original - Ashley's Review 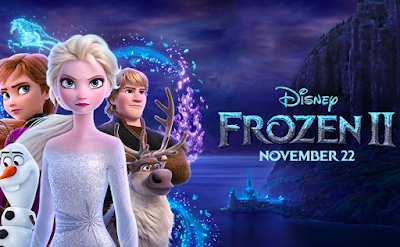 Read Ashley's review of Frozen 2. Why was Elsa born with magical powers? The answer is calling her and threatening her kingdom. Together with Anna, Kristoff, Olaf and Sven, she'll set out on a dangerous but remarkable journey. In “Frozen,” Elsa feared her powers were too much for the world. In “Frozen 2,” she must hope they are enough. From the Academy Award®-winning team—directors Jennifer Lee and Chris Buck, producer Peter Del Vecho and songwriters Kristen Anderson-Lopez and Robert Lopez—and featuring the voices of Idina Menzel, Kristen Bell, Jonathan Groff and Josh Gad. 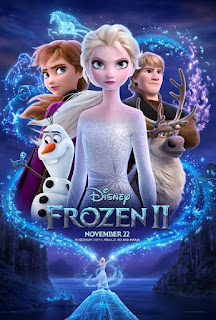 It’s been six years since Frozen came out, we’ve been waiting very patently for the sequel. It’s had been tightly under wraps with many people wondering what the story is and the big reveal! Turns out...it was pretty basic and not surprising at all.

Our favorite Snow Queen, Elsa (Idina Menzel) returns with her akwardly lovable sister, Anna (Kristen Bell). They are joined by their snowman friend, Olaf (Josh Gad) and Anna’s boyfriend, Kristof(Jonathan Groff). Elsa has been ruling Arendelle but still feels out of place, she gets a calling from a magical spirit to go to a magical forest. Elsa and the gang head to the forest where we meet new characters including Lieutenant Destin (Sterling K. Brown) and Queen Iduna (Evan Rachel Wood). Elsa needs to solve the mystery of the forest and learn the origin of her magic. The movie does not live up to its predecessor. Frozen was such a groundbreaking film for Disney - it showed the importance of family and that true loves kiss isn’t always what can save you. “Let It Go “ is a cinematic achievement, one that I can only compare to “Tale as Old as Time”. This movie just tries to repeat a lot of the same ideas from the first film, it didn’t feel original. The story was very predictable and it didn’t feel like I was watching something that they put a lot of effort into.

I remember Frozen being under a lot of scrutiny when the film came out for its lack of diversity. I thought Lieutenant Destin was a great addition but he needed more screen time. I appreciate them trying to show that the Northuldra people were tricked by the people of Arendelle showing the sad history that many indigenous people have experienced. Nothing by their looks would me believe Anna or Elsa are Northuldran. I think if their intention was to make them mixed, since the mom is full, then they should’ve either animated them differently or made Queen Iduna someone else in that history. It’s pretty clear to me they didn’t look Northuldran and that’s a missed opportunity for Disney to be more inclusive.

The songs were ok, “Into the Unknown” is Elsa’s big song, it has a nice background melody but it doesn’t come close to let it go. It felt like they just kept trying the same formula and I wanted something different. The song “Lost in the Woods” attempted to be funny but it was too strange for me and missed the mark.

Surprisingly Olaf was the best part of this movie, he has some hilarious scenes. He was my least favorite from the first film but I loved him in this one. Also very disappointed we didn’t see Anna and Elsa say goodbye, that was weird because the whole story of these sisters the backbone of this franchise.

I’ll watch this again to see if I feel any different. Other than that I’ll stick to the original.