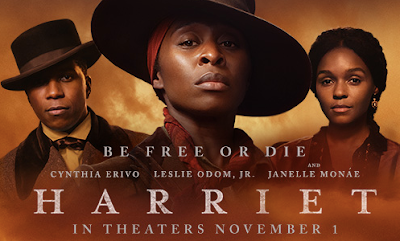 Read Nikki's review of Harriet. Based on the thrilling and inspirational life of an iconic American freedom fighter, HARRIET tells the extraordinary tale of Harriet Tubman's escape from slavery and transformation into one of America’s greatest heroes. Her courage, ingenuity, and tenacity freed hundreds of slaves and changed the course of history. 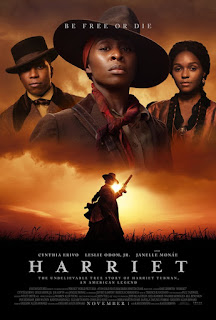 ‘Harriet’ comes to theatres this weekend! Honestly, I had no idea this movie was even coming out and honestly feels so long overdue. After finding out about the movie, I was excited. Harriet Tubman was such a strong, kick butt woman! I didn’t know much about her personal life, so after hearing about this movie, I was very curious about her background. This movie showed me

For those who don’t know, this movie is about Harriet Tubman. It starts off with her escaping from slavary and eventually encounters dangerous missions that include saving hundreds of slaves through the Underground Railroad. Tubman was so brave and determined. The movie shows her growing into a hero and changing the course of America.

Cynthia Eviro was excellent. I know there was a lot of talk and people were angry that they picked her to play the Harriet, but she did well. She was felt very raw with her emotional growth and through the fear and determination. Joe Alwyn played Gideon Brodess and was great, I hated him so much in the movie, so job well done there. Leslie Odom Jr. was effortless genuine. The entire cast did such a great job bringing her story to life.

It felt like a dramatic thriller/adventure movie. I won’t lie, at times there were parts in the movie that were funny and I felt it shouldn’t have been funny at that moment. However, it did give us a break on the intense drama it did show. There were also times where the scenes seemed too long, especially since these scenes didn’t really have much of a historical impact and more about the relationships between her and another. I feel like if they didn’t do so much of this, we could have seen more of Tubman’s life working with freeing the slaves. One more thing I wasn’t really liking was Tubman’s spiritual connection with God. I feel like it was done a little too much. However, this isn’t such a huge deal. The movie was still compelling regardless.

The movie definitely was able to bring back Tubman’s spirit and tell a story that everyone should learn. It’s obviously so insane that this actually happened. This movie was about her history and presenting us with the real Harriet Tubman. It was a real life origin story of a rescuer. This movie definitely reminded me about how horrible the past was and how far we’ve come. It also showed that one person really can change everything. We learned about this stuff in school, but not in this much detail. Therefore, I believe that this should be seen for people in every generation.