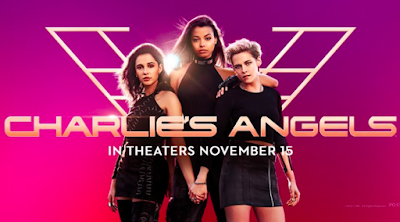 Read Nikki's review of Charlie's Angels. Director Elizabeth Banks takes the helm as the next generation of fearless Charlie’s Angels take flight. In Banks’ bold vision, Kristen Stewart, Naomi Scott, and Ella Balinska are working for the mysterious Charles Townsend, whose security and investigative agency has expanded internationally. With the world’s smartest, bravest, and most highly trained women all over the globe, there are now teams of Angels guided by multiple Bosleys taking on the toughest jobs everywhere. The screenplay is by Elizabeth Banks from a story by Evan Spiliotopoulos and David Auburn. 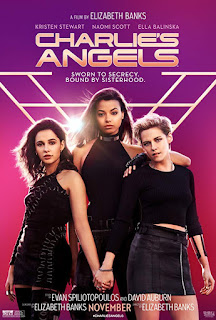 Charlie’s Angels comes out this weekend! This movie was getting a ton of buzz and was very hyped up. When I first heard that they were doing a reboot, I was so excited! I was 8 years old when the one in 2000 came out. But I was such a huge fan, so I was a bit excited. However, when finally the first preview was released, I thought it looked okay. After watching it, I can say the same thing.

The movie starts off with two angels Sabina (Kristen Stewart) and Jane (Elsa Balinska) taking on a case. The people in charge of them are called Bosley. When the original Bosley (Patrick Stewart) retires, a younger Bosley (Elizabeth Banks) gives them the case. The client is Elena Houghlin (Naomi Scott), a technology genius that developed a new technology that can be weaponized if put into the wrong hands. Of course, it IS stolen. Therefore, It’s up to these angels to help protect Elena and find these devices before they end up being used as weapons.

This is Elizabeth Banks second movie she has directed. I will say I enjoyed her first one more, Pitch Perfect 2. I did appreciate the empowerment of female credentials. The movie was pretty bland for me. My favorite scene was probably the end during the credits. There were action and glitz scenes, however, the comedy didn’t really do it for me. I didn’t laugh one bit .I feel the comedy seemed a bit forced.

I will say that I did enjoy watching Kristen Stewart. She has blossomed so much as an actress. It was cool to see her smiling and having fun. I’m so used to her in the Twilight series. She was the jokester of the group. The other two really didn’t leave an impact on me. I did enjoy the music in the movie. Ariana Grande sung most of the soundtrack, so it was fun listening to her in the movie.

I really do feel like the audience for this movie is aimed at teenage girls. It was entertaining, yes. But forgettable and over hyped. I definitely pick the 2000’s film over this one BY FAR. I feel bad because I really wanted it to be good. I do love a great badass girls movie, but this wasn’t it.