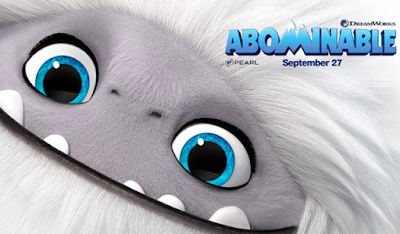 Read Nicolette's review of Abominable. DreamWorks Animation and Pearl Studio’s co-production Abominable takes audiences on an epic 2,000-mile adventure from the streets of a Chinese city to the breathtaking Himalayan snowscapes.

When teenage Yi (Chloe Bennet, Marvel’s Agents of S.H.I.E.L.D.) encounters a young Yeti on the roof of her apartment building, she and her friends, Jin (Tenzing Norgay Trainor) and Peng (Albert Tsai), name him “Everest” and embark on an epic quest to reunite the magical creature with his family at the highest point on Earth.

But the trio of friends will have to stay one-step ahead of Burnish (Eddie Izzard), a wealthy man intent on capturing a Yeti, and zoologist Dr. Zara (Sarah Paulson) to help Everest get home. 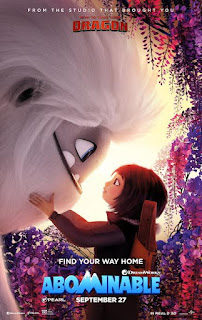 Abominable is in theaters on September 27th, 2019.

Abominable comes to theatres this weekend! Honestly, when I saw the trailer I wasn’t really interested, although I did think the yeti was cute. However, it didn’t spark my attention. Now after watching the movie, I can say I still don’t really care much about it besides its beautiful animation, but at this point, aren’t majority of animated movies stunning now?

Yi (Chloe Bennett) is a teenager who is living with sadness and staying busy due to her father’s death. She stays busy doing many jobs such as dog walking to earn money to eventually travel around exotic parts of China, something her and her father always dreamed about. One night she finds Everest (Joseph Izzo), a magical yeti, hiding on the roof of her building. Everest was captured by a zoologist (Sarah Paulson) and a former explorer (Eddie Izzard). He managed to escape from captivity and wants to go back to his home on Mount Everest. It’s up to Yi and her childhood friends to bring Everest back to his home.

I will say this movie is gorgeous to look at. Yeti was adorable (now thinking about it though, how does he understand english?).The movie did have some laughable moments.I do however feel that I was quite bored in some parts of the movie. I often found myself wanting them to just get to Mount Everest already. I feel the character development was insufficient. In the beginning to the middle of the movie, there were hints of her childhood friend Jin to be a romantic interest for Yi. However, after the middle of the movie, the script runs short of going beyond the hints. The mother and grandmother were unnecessary. They were just there for screen time. They could have just been mentioned and not shown because there was no need for them AT ALL.

I also thought it was a little weird as to why they cast a woman in her mid 20’s to voice a 15 year old teenage girl. The voice was definitely a deep-adult voice. For the first 10 minutes I was trying to figure out if she was supposed to be a college student. Many kids may not even notice, but watching as an adult, it was a bit distracting. Lastly, there was a lot of magic in the movie, but it wasn’t really explained. He can make flowers grow, make fruits grow incredibly huge and repair broken objects but how and/or why??

I feel like the kids would enjoy this movie because it has a lot of kid-jokes, but for most adults, it was the same adventure story.