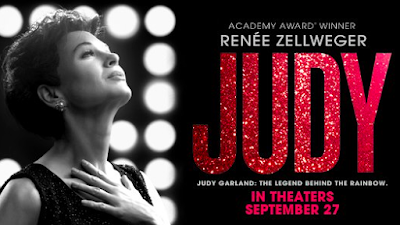 Read Ashley's review of Judy! Winter 1968 and showbiz legend Judy Garland arrives in Swinging London to perform a five-week sold-out run at The Talk of the Town. It is 30 years since she shot to global stardom in The Wizard of Oz, but if her voice has weakened, its dramatic intensity has only grown. As she prepares for the show, battles with management, charms musicians and reminisces with friends and adoring fans, her wit and warmth shine through. Even her dreams of love seem undimmed as she embarks on a whirlwind romance with Mickey Deans, her soon-to-be fifth husband. Featuring some of her best-known songs, the film celebrates the voice, the capacity for love, and the sheer pizzazz of “the world’s greatest entertainer.” 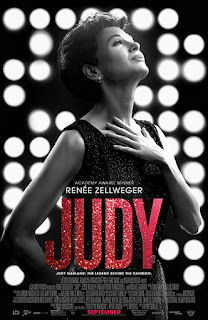 Judy is about actress and singer, Judy Garland 30 years after she played Dorothy in the Wizard of Oz. Struck down by the life of fame, she struggles with addiction and trying to provide for her children. When an opportunity to get her life back on track presents itself she finds herself in London for her last stage tour. Can this biopic take viewers over the rainbow?

Hollywood is a place of fame and stardom but sometimes that comes with a price. Judy Garland’s life is a prime example of that price as this movie focused on the effects it had on her life. Although an emotional story, the way it is presented is more of a farewell to an icon. It shows the moments she was up and down but how she continued to show her charm through it all.

Renee Zellweger was a great choice to play Judy Garland. She gave a passionate performance that showed both her own talent and that of Judy Garland as well. The unpredictable nature of keeps the audience guessing what will happen next which allows Renee Zellweger to almost seamlessly make you forget that she is playing a role. Her portrayal of how charismatic, unpredictable and heart-breaking Judy Garland personality was one to be remembered.

Where this movie faltered was in how it bounced back and forth between the more known roles and youth of Judy Garland then to her adult life. It was distracting when the movie would flash back to her youth because it felt like it was loosely connected to the scene prior to it but not enough to be interested. It made it feel dull despite starting off more promising.

Judy may be one to be remembered for Renee Zellweger’s performance but forgettable with the storyline. It is an odd balance where it feels like a good movie that was poorly executed in its plot. Do not let that stop you from going to hear some classic song however!