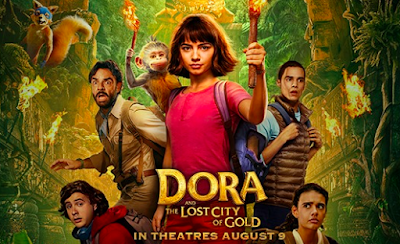 Read Ashley's review of Dora and the Lost City of Gold. 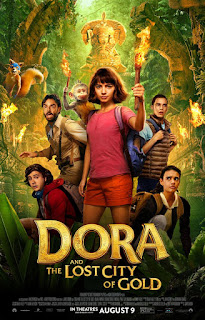 With all the live-action movies being released, it was only a matter of time before Nickelodeon joined the party. Choosing one of their shows that has been on for nearly 20 years was a great place to begin for its first live-action Nick Jr. movie. Audiences are able to see how Dora transforms from being the 7 year-old girl that people know into a teenager who is still familiar with her upbeat personality and voice pitch.

This familiarity in Dora the Lost City of Gold is what really pushes the movie forward. Instead of trying to turn Dora into something else, the movie plays on her elements from the television show. Isabela Moner who plays Dora really shines in this movie portraying the positive, titular character. She kept the curious, oblivious personality of Dora while also giving her a personality of courage and the power of being her true self.

The characters are what really makes this movie into something entertaining and fun to watch. While it does have a plot that it fun, the characters make the real adventure. They provided humor that is appropriate for children and adults alike. Several moments in the movie are laugh out loud funny and are very self-aware of the subject matter. Instead of trying to take on a serious tone, the movie is fun and light hearted in the way it pokes fun at itself.

Dora and the Lost City of Gold is a movie that is full of entertainment. Seeing the characters on the big screen that have been around since 2000 is enough to be nostalgic while adding a new flair. It is a comedy that makes you wonder if we will be seeing Dora in the new future on the big screen for another adventure.