'The Kitchen' cooks up a violent crime drama - Lauren's Review 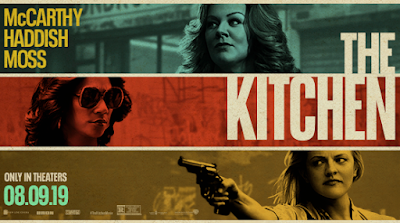 Read Lauren's review of The Kitchen. The gritty, female-driven mob drama “The Kitchen,” from New Line Cinema and BRON Creative, was written and directed by Andrea Berloff, who was nominated for an Oscar for the original screenplay for “Straight Outta Compton.” “The Kitchen” stars Oscar nominee Melissa McCarthy (“Can You Ever Forgive Me?” “Bridesmaids”), Tiffany Haddish (“Girls Trip”), and Elisabeth Moss (“The Handmaid’s Tale”) as three 1978 Hell’s Kitchen housewives whose mobster husbands are sent to prison by the FBI. Left with little but a sharp ax to grind, the ladies take the Irish mafia’s matters into their own hands—proving unexpectedly adept at everything from running the rackets to taking out the competition…literally. 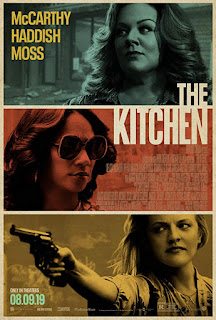 Going into The Kitchen, I wasn’t sure what to expect. I had seen a few previews and knew that it seemed like a drama, but was starring Melissa McCarthy and Tiffany Haddish, so I wasn’t totally convinced it wasn’t a comedy. Let me tell you – it was NOT a comedy. This had so much more violence than I imagined. Think Widows, but set in the 1970’s.

When their Irish gangster husbands get caught in a heist and sent to prison, three wives take over their mob business and become the most powerful crew in Hell’s Kitchen circa 1979. The three wives are Melissa McCarthy, Tiffany Haddish and Elisabeth Moss – all taking on gritty roles. Elisabeth Moss I understood in the role because I watch her go through hell every week in The Handmaid’s Tale, but this seemed like new territory for Haddish and McCarthy.

All three women were amazing in the movie, and I loved the characters they brought onto the screen. And while I’ll say it was pretty cool to see an all- female lead crime drama, the whole story felt a little rushed for me. They jumped around quite a bit and put in a LOT more violence than I expected, with little to no consequences. It may have been due to the timing, watching this movie in the wake of the El Paso and Dayton shootings, but I just did not enjoy all the gun violence. I don’t know that I was in the right mindset to fully enjoy this movie.

I don’t know if it’s because I wasn’t born or living in this time period, but the violence and gang mentality seemed unbelievable in this time period. People were getting gunned down in broad daylight in this movie, and absolutely nothing of consequence happened. It was an interesting concept and I thought this movie was good, but I think Widows did it better.