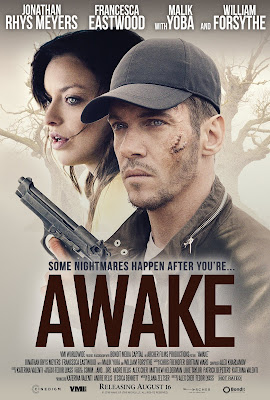 Enter to win a Digital Download of Awake!
AWAKE centers on a man (Meyers) who wakes up in a hospital bed with no recollection of who he is or why he is there, but quickly learn she’s the lead suspect in a series of murders and is now wanted by the police.With the help of a trusting nurse (Eastwood), he manages to stay one step ahead of the detectives hunting him down.As he uncovers some hard truths about his past, he quickly realizes some nightmares happen after you’re awake.

SYNOPSISOn a quiet evening, a shabby beige sedan speeds down a country highway. Dust and gravel fly through the air when suddenly the car slides out of control into a ravine. Later a man wakes up in a hospital bed with no recollection of who he is or how he got there. His nurse Diana (Francesca Eastwood) is unable to find any identification and refers to him as John Doe (Jonathan Rhys Meyers). The police barge into the hospital, accusing John of being a serial killer responsible for the murder of several young women inthe area. As the Sergeant ushers John into a private room for questioning, he manages to escape with the help of Diana, who is convinced of his innocence. The fugitives then set off for the last crime scene in search of clues and answers to clear John's name but the benevolent nurse will soon uncover the shocking truth behind the amnesiac's identity and the web of deceit that will lead him to a final fight for his survival.   Awake is available on Digital and VOD August 16th, 2019.
Posted: August 16, 2019
Labels: Expired Contests
Newer Post Older Post
Subscribe to: Post Comments (Atom)
Subscribe to Mind on Movies for Movie Screenings and Giveaways.