Home » BillyJoynt19 » Trends19 » Celebrate the 20th anniversary of THE MATRIX, for the first time in Dolby Cinema!
BillyJoynt19 Trends19

Celebrate the 20th anniversary of THE MATRIX, for the first time in Dolby Cinema! 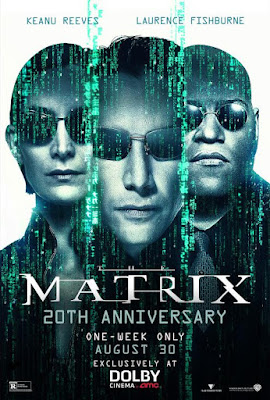 Return to the Matrix.
Celebrate the 20th anniversary of THE MATRIX, for the first time in Dolby Cinema at AMC® 8/30–9/5.

Dolby for the first time ever is bringing The Matrix to theaters in Dolby Vision and Dolby Atmos. Beginning the week of August 30th, fans will be able to check out The Matrix exclusively at one of 135+ Dolby Cinema at AMC locations around the U.S. where with Dolby Vision, the picture comes alive with amazing brightness and darker darks, while Dolby Atmos ensures sounds that flows around moviegoers, including overhead.
You can purchase tickets to this showing HERE

What is the Matrix? Have you ever had a dream that you were so sure was real? What if you couldn't awaken? How would you know the difference between dream and reality? When a beautiful stranger (Carrie Ann Moss) leads computer hacker Neo (Keanu Reeves) to a forbidding underworld, he discovers the shocking truth--the life he knows is the elaborate deception of an evil cyber-intelligence. Neo joins legendary and dangerous rebel warrior Morpheus (Lawrence Fishburne) in the battle to destroy the illusion enslaving humanity. Now, every move, every second, every thought becomes a fight to stay alive--to escape The Matrix.