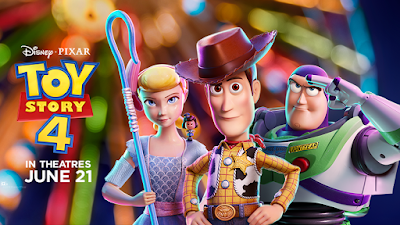 Read Nicolette's review of Toy Story 4. Woody has always been confident about his place in the world, and that his priority is taking care of his kid, whether that’s Andy or Bonnie. So when Bonnie’s beloved new craft-project-turned-toy, Forky (voice of Tony Hale), declares himself as “trash” and not a toy, Woody takes it upon himself to show Forky why he should embrace being a toy. But when Bonnie takes the whole gang on her family’s road trip excursion, Woody ends up on an unexpected detour that includes a reunion with his long-lost friend Bo Peep (voice of Annie Potts). After years of being on her own, Bo’s adventurous spirit and life on the road belie her delicate porcelain exterior. As Woody and Bo realize they’re worlds apart when it comes to life as a toy, they soon come to find that’s the least of their worries. 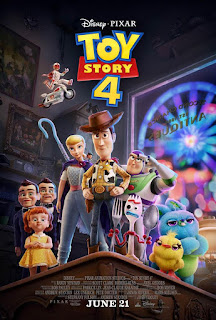 Summer is in full effect! What better way to start off the summer with your kids than watching Toy Story 4 this weekend! Growing up with these movies has been such an amazing experience. I love every Toy Story movie and it’s really special being able to see how far some of our beloved characters have come. However, when I first heard they were making a fourth Toy Story movie, I was nervous and not very interested. Toy Story 3 was a great way to end the trilogy, they didn’t need to make any more. When I first watched the Toy Story 4 trailer, I still wasn’t interested and thought one of the new characters, Forky, was annoying. After watching the movie, and wiping my tears, I was so happy and excited to watch again!

The movie starts with Bonnie starting kindergarten and making a new friend who is a plastic spork named Forky (Tony Hale). Forky is convinced he belongs in the trash. Bonnie’s family decides to go on a road trip where Woody (Tom Hanks) and the gang make sure Forky is safe and tries to persuade Forky that he should embrace being a toy. Of course, Forky jumps out the trailer window so Woody takes it upon himself to go out and search for the toy that matters most to Bonnie right now. Along the way, Woody takes a detour and reunites with his long-lost friend Bo Peep (Annie Potts). He also meets other toys along the way such as Duke Caboom (Keanu Reeves), Bunny (Jordan Peele), Ducky (Keegan-Michael Key) and a creepy doll Gabby Gabby (Christina Hendricks).

The movie was very comedic, easily the funniest Toy Story movie yet. Key and Peele definitely excelled in their roles and brought so many laughs to the audience, not surprising due to the fact the teaser trailer with the two of them was funny as well. As much as I thought Forky would be annoying throughout the movie, I did end up liking him a lot. He was very relatable and the relationship he and Woody had was very heartwarming. I loved Bo Peeps upgrade! Everytime she came on screen I was so excited because she is so cool! The movie had some dark scenes, especially the scenes with the ventriloquist dummies.

Josh Cooley did such an amazing job with staying true to the legacy while adding original ideas to the Toy Story movies. There were so many themes throughout the movie that tied in so well. This movie is a perfect addition and one of the best Pixar movies ever made. They did a fantastic job making the movie enjoyable for both kids and the adults who grew up on this franchise. Pixar is known for their visually breathtaking animation and this one is so spectacular, much more than any of the others.

No spoilers, but I won’t lie, I do wish that the ending spent some time honoring the original Toy Story crew. But maybe that’s for a different movie..

Please note, there is a small 10 second scene at the end of the credits that was enjoyable.
Go see the best summer movie this weekend! You won’t regret it!