'The Tomorrow Man' is a Senior Love Story - Ashley's Review

Ed Hemsler (John Lithgow) spends his life preparing for a disaster that may never come. Ronnie Meisner (Blythe Danner) spends her life shopping for things she may never use. In a small town somewhere in America, these two people will try to find love while trying not to get lost in each other’s stuff. Rated PG 13. A Bleecker Street Release. 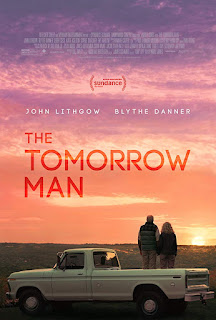 The Tomorrow Man is in select theaters on June 7th, 2019.

The Tomorrow Man follows a man named Ed Hemsler who spends his time preparing for the end of the world. He meets a woman named Ronnie Meisner who has her own obsession with shopping. Together the two find companionship. Can this film picked up from the Sundance Festival be a senior lovestory to remember?

This film shows the main characters fairly quickly and how their vices control their lives. It jumps even faster into them intermingling but is lackluster because their chemistry is almost nonexistent and feels forced. This awkwardness could have been to show the characters’ absence from the dating world so long but it did not present itself well.

The plot is very dull and never has a factor to make viewers want to cling on to the story to see what is going to happen. To have two characters who have an obsession boarding on hoarding without bringing a real conflict to push everything forward made it film full of restless dialogue.

If I had to go for a senior love story, I would choose another film. The Tomorrow Man does not have enough enthusiasm to have viewers’ interest. It is better putting this movie off until tomorrow.