Home » Reviews19 » SteveLocke19 » 'Poms' Solidly fun and heartfelt movie, with a little cheese on the side - Steve's Review
Reviews19 SteveLocke19

'Poms' Solidly fun and heartfelt movie, with a little cheese on the side - Steve's Review 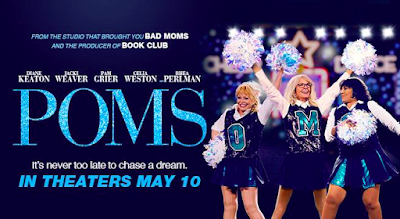 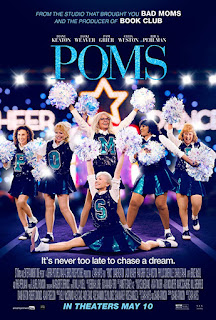 I say this with no disrespect to Diane Keaton or the rest of the amazing cast and crew of the Poms movie, but I went in expecting to be thoroughly bored and unmoved. I can say now, having seen it, that my expectations could not have been more wrong.

Poms follows Martha (Diane Keaton) as she uproots her life and moves into an assisted living community. Normally a quiet introvert, Martha takes a journey with a group of women as they seek to start a cheer-leading squad, fulfilling a life goal she was never able to achieve in her younger years.

There is more to Martha's motivations that I won't spoil here, but boy does that add some weight and emotion to the movie. The acting by not only Keaton, but her costar Jackie Weaver was phenomenal. I found myself cracking up at Weaver's one-liners every other beat.

This movie definitely bordered on cheesiness, which I never shy away from, but found its footing with an emotionally grounding group of characters, each with an interesting plot line to follow. I am not saying this movie will win any Oscars, but it definitely had me in my feels at times, and made me want to call my grandmother as soon as I left the theater. This is the perfect film to take your mothers and grandmothers for Mother's Day weekend.