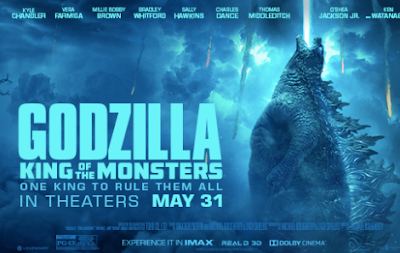 Read HoBin's review of Godzilla : King of the Monsters. Following the global success of “Godzilla” and “Kong: Skull Island” comes the next chapter in Warner Bros. Pictures’ and Legendary Pictures’ cinematic MonsterVerse: “Godzilla: King of the Monsters,” an epic action adventure that pits Godzilla against some of the most popular monsters in pop culture history. The film was directed by Michael Dougherty (“Krampus”), and stars Oscar nominees Vera Farmiga (“Up in the Air,” “The Conjuring” films), and Ken Watanabe (“The Last Samurai”) and Sally Hawkins (“Blue Jasmine”), both reprising their “Godzilla” roles; Kyle Chandler (“The Wolf of Wall Street,” “Manchester by the Sea”); Millie Bobby Brown (“Stranger Things”) in her feature film debut; Bradley Whitford (“Get Out”); Thomas Middleditch (HBO’s “Silicon Valley”); Charles Dance (HBO’s “Game of Thrones”); O’Shea Jackson Jr. (“Straight Outta Compton”); Aisha Hinds (“Star Trek Into Darkness”); and Golden Globe nominee Zhang Ziyi (“Memoirs of a Geisha,” “Crouching Tiger, Hidden Dragon”). The new story follows the heroic efforts of the crypto-zoological agency Monarch as its members face off against a battery of god-sized monsters, including the mighty Godzilla, who collides with Mothra, Rodan, and his ultimate nemesis, the three-headed King Ghidorah. When these ancient super-species—thought to be mere myths—rise again, they all vie for supremacy, leaving humanity’s very existence hanging in the balance. 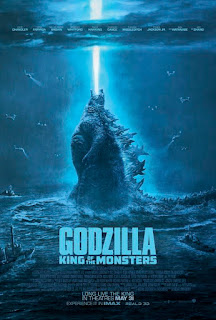 Godzilla : King of the Monsters, the sequel of Gareth Edward’s 2014 and the 2nd installment of monster universe finally released. Lots of people get hyped when trailers are released. The trailer showed beautiful visuals and fans get excited because the trailer shows not only Godzilla but other famous monsters such as Mothra, Rodan, and King Gidorath.

And all the monsters and their sequences in the movie was great, spectacle and visually stunning. Compare to 2014 Godzilla, this movie shows fairly larger amount of Godzilla and other monsters. All the fight sequences between monsters were very spectacle with mass destructions. Probably lots of classic Godzilla fans will satisfy with those scenes. All those beloved old (since 1960s) monster characters recreated, redesigned in Hollywood and watching their fight with better CGI, and much bigger scale in big screen should be satisfy them. Yes director really carefully shot and worked on all the monster sequence and those were great but… that’s it.

Still you have to remember that the most part in the movie, story flows with human characters. Even though this sequel shows more sequences and screen time with monster, but still people (human characters) are the one who carries the movie (story). And honestly they were horrible and those human part in the movie was very boring. The way character speaks, their motivation, and all those build up are very predictable, emotionally lacking and I felt that characters are just following script so situation could build up to make monsters fight. There was no likeable, memorable human character at all.

It looks like director and screenwriter really cared about action sequences and monsters but not the human characters and overall story. Tone of movie is very different from the 2014 Godzilla which means less realistic and I felt I was more likely watching 1990s Power Ranger. (Maybe some people may like those old fashioned cheesy tone but I hated).

I was very disappointed with this movie because movie could’ve been so much better if they crafted better story with characters. Visually stunning and monsters were great but story, build up and characters were very bad.

HoBin (Contributor) currently works in Baltimore. He has been a fan of movies most of his life. He enjoys all genre's of movies but especially Action Thriller with Drama. He also enjoys playing/watching tennis.
Click Here to check out HoBin's Articles.
Posted: May 30, 2019
Labels: HoBinKim19, Reviews19
Newer Post Older Post
Subscribe to: Post Comments (Atom)
New Reviews