Films earning acclaim on the international festival circuit are among those featured at the Arab American National Museum’s (AANM) 14th Arab Film Festival (AFF), June 7-16, 2019, with screenings at the Dearborn museum, in Detroit and in Ann Arbor.

See below on the Top 5 films that I am looking forward to viewing.
Tickets are available online at www.aanmfilmfest.org. Capernaum
Capernaum tells the story of Zain (Zain al Rafeea), a Lebanese boy who sues his parents for the "crime" of giving him life. The film follows this gutsy, streetwise child as he flees his negligent parents, survives through his wits on the streets and takes care of Ethiopian refugee Rahil (Yordanos Shiferaw) and her baby son, Yonas (Boluwatife Treasure Bankole). Made with a cast of non-professionals playing characters whose lives closely parallel their own, Capernaum is a film with an expansive palette: without warning it can ignite with emotional intensity, surprise with unexpected tenderness, and inspire with flashes of poetic imagery. Marjoun and the Flying Headscarf 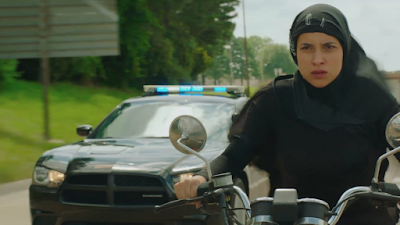 Marjoun, clad in all black, with dark eyes and dark hair, is 17 years old and an outsider in her home of Little Rock, Arkansas. Her father Aabid is from Lebanon, and in county jail awaiting trial for his alleged connections to Hezbollah. As she deals with the tensions in her high school and the attempts to get her father out of jail, she takes solace in writing poetry on her typewriter and fancying Chaney, the boy in her math class. When hope dims for her father’s release, Marjoun seeks to take to the open road on a motorcycle. Will she escape or be pulled back into her life in Little Rock? Yommedine

Beshay — a man cured of leprosy — has never left the leper colony in the Egyptian desert where he has lived since childhood. Following the death of his wife, he finally decides to go in search of his roots. With his meager possessions strapped to a donkey cart, he sets out. Quickly joined by Obama, the Nubian orphan he has taken under his wing, Beshay will cross Egypt and confront the world with all its sorrows, its hardships and moments of grace, in his quest for a family, a place to belong, a little humanity. Sofia

Sofia, 20, lives with her parents in Casablanca. Suffering from pregnancy denial, she finds herself breaking the law by giving birth to a baby out of wedlock. The hospital gives her 24 hours to provide them with the identification papers belonging to the father of the child before informing the authorities. Weldi

Riadh is about to retire from his work as a forklift operator at the port of Tunis. The life he shares with his wife Nazli revolves around their only son, who is preparing for his high school exams. The boy’s repeated migraine attacks are a cause of much worry to his parents. But just as they finally seem to be getting better, he disappears without a trace. Are there any films you're interested in? Comment them below!