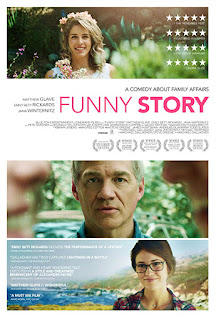 Read Joanna's review of Funny Story. Walter Campbell is an aging heartthrob struggling to keep up appearances— especially with his estranged adult daughter, Nic (Jana Winternitz). In an attempt to reconnect with his family, he invites himself to crash her vacation in Big Sur. Offering a ride to her friend Kim (Emily Bett Rickards, “Arrow”), the two bond in unexpected ways that are sure to ruin the lives of everyone in their path.


After failing to break up with his much younger girlfriend, ex-fantasy TV show star Walter (The Wedding Singer’s Matthew Glave) invites himself to his daughter Nic’s weekend getaway with friends in hopes of repairing their strained relationship. He obliges when Nic asks him to give a ride to her friend Kim, whose car has broken down after leaving her own mother’s funeral. Tragic comedy supposedly ensues.

I will admit that this movie had some very unexpected twists. Because it surprised me, I held out hope that it might redeem itself. However, it failed to pay off in the end. The film relied too heavily on lesbian stereotypes, while it failed to fully develop any of the characters to the point where one might feel some empathy for them. Walter seemed to be motivated by guilt and his penis, while Kim came off as a (possibly sex addicted) self-destructive person, Walter’s friend was horribly misogynistic, and Nic’s motives seemed questionable at best.

Minor characters who seemed to exist to provide comic relief were more effective at coming across as aliens. And perhaps the filmmakers were purposely trying to defy tropes, but I have to say it was very unsatisfying that the audience never finds out what was written on the card Kim gets in the beginning. Overall I was left befuddled by this movie and would not recommend it.

Joanna (Guest Contributor) was born and raised in Metro Detroit. A fan of thought-provoking thrillers and indie films, she also enjoys a good chick flick. When not at the movies, she can be found running, reading, or writing bar trivia.
Click Here to check out Joanna's Articles.
Posted: May 23, 2019
Labels: JoannaConnelly19, Reviews19
Newer Post Older Post
Subscribe to: Post Comments (Atom)
Subscribe to Mind on Movies for Movie Screenings and Giveaways.