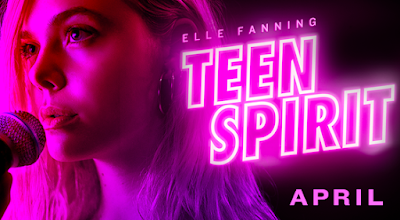 Read Lauren's Review of Teen Spirit. Violet (Elle Fanning) is a shy teenager who dreams of escaping her small town and pursuing her passion to sing. With the help of an unlikely mentor, she enters a local singing competition that will test her integrity, talent and ambition. Driven by a pop-fueled soundtrack, TEEN SPIRIT is a visceral and stylish spin on the Cinderella story. 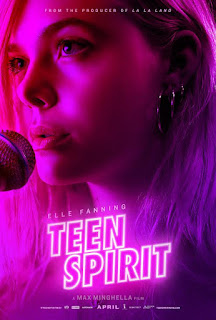 As soon as Teen Spirit opened with Genesis by Grimes, I knew I was going to be in for an awesome movie and an even better soundtrack. Teen Spirit was FULL of pop classics and beautiful cinematography that kept this movie fun and exciting. Elle Fanning absolutely slayed the main protagonist, Violet, a shy teenager struggling in a small farm town in the UK who loves to escape her reality by singing. I had no idea she could sing so well, but I’m so glad I found out. I’ve listened to the original soundtrack on Spotify for two days now!

Teen Spirit follows Violet as she goes on the journey of a lifetime. When a worldwide singing competition holds auditions locally, Violet finally sees her chance to get out of her boring life and show the world her singing talents. With the help of a drunk Russian ex-Opera singer as her mentor, she tries out for the Teen Spirit UK competition and makes it into the finals. However, she begins to learn exactly what the life of celebrity is and the price you pay for fame. She falls prey to the appeals of the pop scene and night life before ultimately figuring out just what she wants from this competition. The Teen Spirit UK competition scenes are beautifully shot, and it was so fun to watch amazing performers covering classic songs. While it was a bit of a predictable storyline, the execution of Violet’s story is worth it. Her final performance is absolutely incredible, and the story flows without putting the entire focus on the competition. It isn’t only about hoping Violet wins, but about her journey growing up and learning about herself throughout her time competing. I walked out of this movie with a happy feeling and haven’t stopped listening to the soundtrack since.