'Missing Link' is good for all ages - Ashley B's Review 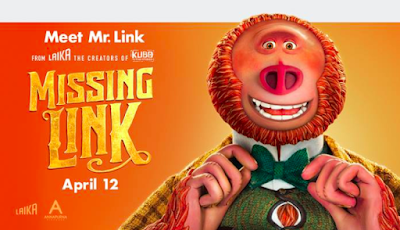 Read Ashley B's review of Missing Link. This April, meet Mr. Link: 8 feet tall, 630 lbs, and covered in fur, but don’t let his appearance fool you… he is funny, sweet, and adorably literal, making him the world’s most lovable legend at the heart of Missing Link, the globe-trotting family adventure from LAIKA. Tired of living a solitary life in the Pacific Northwest, Mr. Link recruits fearless explorer Sir Lionel Frost to guide him on a journey to find his long-lost relatives in the fabled valley of Shangri-La. Along with adventurer Adelina Fortnight, our fearless trio of explorers encounter more than their fair share of peril as they travel to the far reaches of the world to help their new friend. Through it all, the three learn that sometimes you can find a family in the places you least expect. 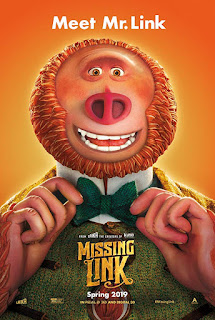 Missing Link follows rare creature explorer Sir Lionel Frost (Hugh Jackman) who is tired of being the laughingstock among other explorers. He sets out to prove his explorations have value and ends up locating the missing link (Zach Galifianakis). It takes him on adventure he never expected leaving the question: can this star filled movie live up to the legend of Sasquatch?

This movie is a fun filled one for the entire family. It has adventure, comedy and a message that can resonate with all ages. I was not expecting it to be so entertaining but I was surprised at its sarcastic dry humor that had almost everyone in the theater laughing.

The animation was something to applaud. It was very captivating to see how it all came together to tell the story. It was also a story that did not bounce sporadically around like some children’s movies do. The plot moved forward in a way that made sense and did not leave the audience confused from jumping all around. With the cast it was fun to hear Hugh Jackson, Zach Galifianakis and Zoe Saldana’s voices in a charming cartoon movie.

If you are looking to watch a cartoon movie good for all ages then I suggest Missing Link. With its star cast and a comically sensible plot, it’s enough to watch to see a new twist on the legend viewers know about the missing link.