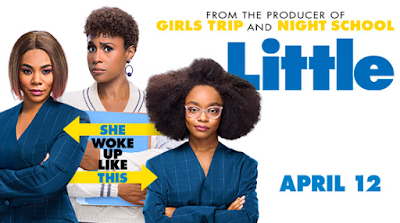 Read Nicolette's review of Little. Jordan Sanders is a take-no-prisoners tech mogul. April is the only one in on the secret that her daily tormentor is now trapped in a tween body just as everything is on the line. Little is an irreverent new comedy about the price of success, the power of sisterhood and having a second chance to grow up — and glow up — right.
Will Packer, blockbuster producer of Girls Trip, the Ride Along franchise, and ten movies that have opened No. 1 at the U.S. box office, including Night School, No Good Deed and Think Like a Man, brings an all-new perspective to the body-swap comedy. 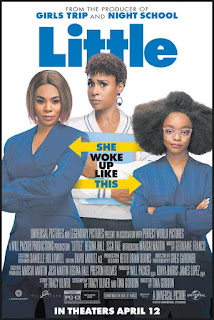 When I first watched the trailer to this movie I was laughing through most of it and was so excited for it to come out. After watching this movie I can say I was 100% satisfied with it! According to the production notes, Marsai Martin, who plays young Jordan Sanders, had an idea for this story at the age of 10 and pitched the idea to the producer of Black-ish. There are so many reviews talking down on this movie and saying its ripping off big but I disagree. There are no original ideas. What Marsai Martin did was a different take on something that’s been done before. Which goes into me saying I’m so proud of Marsai Martin and we really need to go out this weekend and support this movie!

The movie starts with Jordan Sanders (Regina Hall) who is a very successful but very mean tech mogul who has a hex placed upon her and wakes up in the body of her 13 year old self (Marsai Martin). It’s up to her and her personal assistant April (Issa Rae) to figure out how to turn her back into an adult. While this is going on, Jordan must go back to high school while April handles Jordans business.

First off, let’s give credit where credit is due, there aren’t many roles for young black women in Hollywood but Marsai DID THAT. Marsai Martin produced and starred in this movie and she was absolutely fantastic. The story wasn’t perfect, but there are definitely more hits than misses. The pacing was a bit weird and the finale was very predictable. Issa Rae was someone who really stood out for me in the movie. Yes, Regina Hall and Marsai Martin were hilarious, but I laughed harder when Issa Rae was the one with the jokes. Her work was very solid, she even gave us plenty of heartfelt moments

Of course, the comedy was very strong. I won’t lie I’m not an easy person when it comes to making me laugh out loud, but this movie did, plenty of times. Marsai Martin’s performance as the adult Jordan in a kid body is very memorable. What made me laugh the most with her is her interactions with Luke James and Justin Hartley. Yes this movie is beyond cute and maybe overly sweet, but it works. The movie has a very clear message and a good story.

I may go watch again this weekend for all the laughs, I definitely recommend you make your way out and see it! I promise you’ll laugh!