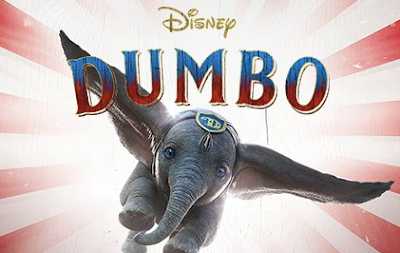 Read Ashley B's review of Dumbo. From Disney and visionary director Tim Burton, the all-new grand live-action adventure “Dumbo” expands on the beloved classic story where differences are celebrated, family is cherished and dreams take flight. Circus owner Max Medici (Danny DeVito) enlists former star Holt Farrier (Colin Farrell) and his children Milly (Nico Parker) and Joe (Finley Hobbins) to care for a newborn elephant whose oversized ears make him a laughingstock in an already struggling circus. But when they discover that Dumbo can fly, the circus makes an incredible comeback, attracting persuasive entrepreneur V.A. Vandevere (Michael Keaton), who recruits the peculiar pachyderm for his newest, larger-than-life entertainment venture, Dreamland. Dumbo soars to new heights alongside a charming and spectacular aerial artist, Colette Marchant (Eva Green), until Holt learns that beneath its shiny veneer, Dreamland is full of dark secrets. 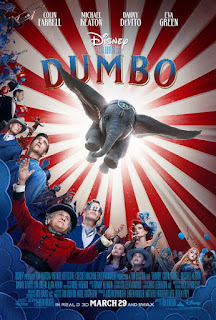 Dumbo is the 2019 remake of the 1941 animated Disney classic. It is part of the studio’s live action series so it has some big shoes to fill, even more so because it is one of Disney’s darker movies. Can Dumbo live up to his live action expectation?

From all of the remakes announced so far, I was the most surprised to see Dumbo in the line up. The plot is quite dark although fitting for the time period. Who better to have direct this version than director Tim Burton? He did an excellent job at putting a modern twist on the original story while still keeping it in the same dark time period. That in addition to the vivid videos turned Dumbo from an okay movie to something worth watching again and again.

The cast added an extra element of interest to the movie as well. Instead of solely focusing on the animals, there were humans as part of the focus too in this version. Several members of the cast are well known which adds to the “big top” feel of the movie. Although Dumbo is family friendly and full of fantasy, it is worth mentioning that there are still many of those darker tones and imagery (including clowns) which may not be idea for very young children.

Tim Burton turned Dumbo into a movie that is fitting for both the early 1900s while also keeping the interest of viewers in 2019. He turned something very bitter into something almost sweet while still keeping that bitterness of the original. It is worth checking out if you are into top notch visuals with a sweeping sense of enchantment.