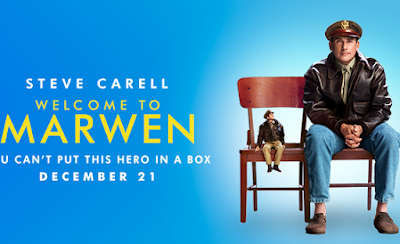 Read Ashley B's review of Welcome to Marwen. This holiday season, Academy Award® winner Robert Zemeckis—the groundbreaking filmmaker behind Forrest Gump, Flight and Cast Away—directs Steve Carell in the most original movie of the year. Welcome to Marwen tells the miraculous true story of one broken man’s fight as he discovers how artistic imagination can restore the human spirit.
When a devastating attack shatters Mark Hogancamp (Carell) and wipes away all memories, no one expected recovery. Putting together pieces from his old and new life, Mark meticulously creates a wondrous town where he can heal and be heroic. As he builds an astonishing art installation—a testament to the most powerful women he knows—through his fantasy world, he draws strength to triumph in the real one.
In a bold, wondrous and timely film from this revolutionary pioneer of contemporary cinema, Welcome to Marwen shows that when your only weapon is your imagination…you’ll find courage in the most unexpected place. 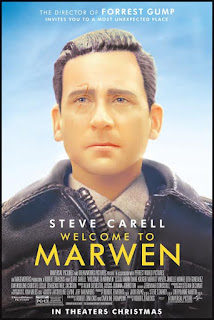 Welcome to Marwen is the movie based on a true story about Mark Hogancamp who finds comfort in the made up town of Marwen. The dolls that he uses to tell various stories surrounding WWII serve as a comfort after he was beaten nearly to death by Nazis for being different. Can the empowering story of a troubled man mixed with female power translate well through the mixed art of reality versus imagination?

The premise of this film is so interesting that a man who seemed to have a good life before facing such a heinous crime could find solace in creating a fantasy world with the real people in his life. It was interesting to watch how Mark’s mind would correlate stuff happening in his life with his life in Marwen. It was truly like being in the mind of someone dealing with mental trauma in a way that I have never witnessed before.

That being said it did not always translate well and got confusing in several parts. While the female cast to help Mark through his pain is was excellent, their backstories could have been more solidified. Several of them were introduced very briefly yet played significant roles in Marwen which left me feeling like I missing pieces of the big picture. Also Mark himself still felt like a mystery when it was all said and done. The movie mostly focused on his present life although it was so affected by him not remembering his previous life before getting attacked leaving both him and myself frustrated.

Without much background information I found myself watching this movie passively. It was hard to feel the emotions on the deeper level it seemed the director was going for and was more so emotional from the idea that this imbalance of reality/fantasy happened to someone in real life.