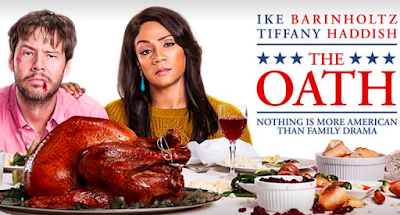 Read Ashley B's review of The Oath. A controversial White House policy turns family member against family member in The Oath, a savagely funny dark comedy about surviving life and Thanksgiving in the age of political tribalism. When Chris (Ike Barinholtz), a high-strung 24-hour progressive news junkie, and his more levelheaded wife Kai (Tiffany Haddish) learn that citizens are being asked to sign a loyalty oath to the President, their reaction is disbelief, followed by idealistic refusal. But as the post-Thanksgiving deadline to sign approaches, the combination of sparring relatives, Chris’s growing agitation and the unexpected arrival of two government agents (John Cho and Billy Magnussen) sends an already tense family gathering completely off the rails. As timely as it is outrageous, The Oath is a gleefully wicked sharp-witted reinvention of the traditional holiday comedy for our divisive political times. 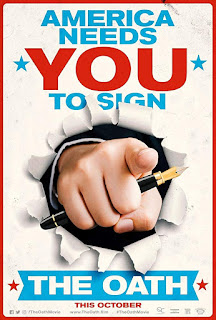 The Oath follows a couple during Thanksgiving weekend after the president declares that an oath pledging loyalty to the country must be signed by the holiday. When the husband’s family comes to visit tensions reach an all time high because of the controversy of the policy. Can this family make it past the loyalty path or will their loyalty to each other be put to the ultimate test?

After the movie Get Out was released, it opened up a new genre of social thrillers and I have been excited to see more of its kind. The Oath did not disappoint as it delivered that same taunting feeling of something eerie happening before your eyes.

With Ike Barinholtz as the director, the Oath had an extra element added to the mix - humor. Between him and his costar Tiffany Haddish already being comedians and having such a realistic cast for his character’s family, there were several laugh out loud funny moments.

Even with the comedy included, this film still had me on the edge of my seat because it is nearly impossible to figure out what it is about or how it will end. I enjoyed every minute of it especially since the situation they were put in there is someone you can relate to in the family.

If you like movies that poke fun while highlighting the potential extremes of the country’s current social climate then I recommend that you watch the Oath. At the very least you get to see two comedians in a more serious role showing the scope of their acting.