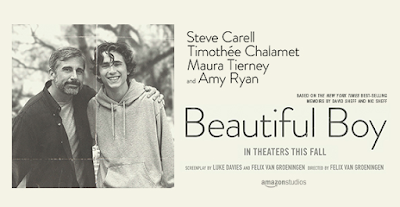 Read Johnny's review of Beautiful Boy. Based on the best-selling pair of memoirs from father and son David and Nic Sheff, Beautiful Boy chronicles the heartbreaking and inspiring experience of survival, relapse, and recovery in a family coping with addiction over many years. 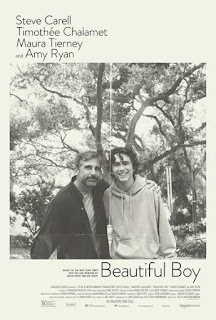 I have to admit I had high hopes for Beautiful Boy. I thought it was going to be a heart wrenching journey about addiction. From the looks of the trailers it had Oscar’s written all over it. Overall the film seemed like a really long PSA about drug use and addiction.

Beautiful Boy is based off the two best-selling memoir’s by David Sheff. It follows the titular characters David Sheff played by Steve Carell and Timothée Chalamet as Nic Sheff. Growing up Nic was a wholesome kid, he got good grades, stayed out of trouble, and loved art. David and Nic had the ideal father/son relationship they enjoyed doing family activities and on the outside it looked like they didn’t keep any secrets from one another. David seemed to truly care about his son. Sadly, it wasn’t until Nic’s high school graduation that things began to change.

This film is comprised of many flash backs showing us how Nic began living a secret life and eventually became a full blown addict. Night after night Nic started coming home at strange times and became more secluded. Soon David took notice and did what any parent would, he tried to get his son the help he needed. Now when I said this was a PSA about drug use, this is what I meant: addiction is challenging and should be taken very seriously.

The film is pertinent to America’s current opioid crisis and shows us the ins and outs of addiction. Overall the film is overwhelmingly sad one. My issue with this film is that it spends 120 minutes chronicling more or less the same situations regarding addiction. You’re never certain if there is any light at the end of the tunnel. Where this film shines is through Steve Carell’s character. He does a great job portraying a father who is willing to do anything to help his son. His actions are truly believable. Chalamet coming off of his Call Me By Your Name Oscar nomination proves that he was meant for serious roles and should be casted accordingly.