Mind on Movies is very excited to announce that we are working with COMET TV on a Comet TV Solar Eclipse Prize Pack Giveaway! 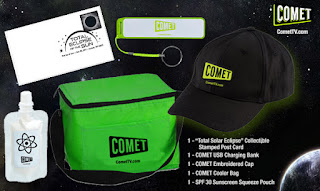 A SOLAR ECLIPSE IS IMMINENT!
On Monday, August 21, 2017, a solar eclipse will be visible across all of North America. The whole continent will experience a partial eclipse lasting 2 to 3 hours. If you care about the well-being of Earth and you're a space-head like us, check out COMET's...

"When The Moon Throws Shade"
Ultimate Guide to Eclipsing
http://www.CometTV.com/eclipse/